Jay: Well, September is here and Labour Day is upon us. This weekend is your last chance to live fast and fancy-free before the autumn rolls in. Spend it well. I’ll try to do the same.

How about you, illustrious colleagues? Squandering your last week of the summer, or making the most of it?

Mark: SQUANDERING IT, MY FRIEND.

With the release of XCOM 2’s substantial expansion, War of the Chosen, I’ve gone off the deep end into caring about XCOM and only XCOM once again. I’ve logged a lot of time with XCOM 2, and I never get tired of it. No matter how much better I get at this game, I know that I can always just up the difficulty and have it brutally kick my ass all over again. Now with this expansion, it can kick my ass in a bunch of ways that it previously couldn’t.

The expansion takes the vanilla XCOM 2 experience and adds a welcome bit of depth to the stock XCOM narrative, while also adding a boatload of enjoyable gameplay bells and whistles. I’m having a hilarious time making XCOM propaganda posters using the game’s absolutely terrible tools included for that purpose. Yeah, it’s just more XCOM. But it’s also better XCOM, with some of the pacing and difficulty issues of the previous iterations ironed out fairly nicely.

This write-up is late largely because I just want to play it. It’s got the voices of Counsellor Troi and Commander Riker in it. You’d be stupid not to play it!

Josh: I finished up season 1 of HBO’s sci-fi series Westworld this week. The show, based on the Michael Crichton film of the same name, is set in a future in which wealthy humans can pay to wander through a vast Wild West scenario interacting with characters played by lifelike robots, enacting their most benign or depraved desires.

To one degree, it’s Jurassic Park with robots (and the writers slip in a few good nods to that other great Crichton story), a classic style sci-fi morality story that asks ethical questions about technology and entertainment. It’s impossible not to think about video games and see this park as an extrapolated future of them. As this form of entertainment becomes more advanced, how might it change our psychology? Especially when the ‘NPCs’ are indistinguishable from flesh and blood humans.

On the other hand, it’s a typical Nolan brothers puzzle box. Jonathan Nolan and Lisa Joy have crafted a dense first season story that turns in ways that are sometimes expected and other times not. Part of the fun is in the mystery itself, so revelations may not yield satisfying results. Your mileage may vary, but I found the writing mostly top notch, with careful pacing and deliberate editing. It’s a show that feels particularly tightly-written when watched at the same time as this sloppy, rushed season of Game of Thrones. The great performances from Thandie Newton, Evan Rachel Wood, and Jeffrey Wright (who is fast becoming my middle-age man crush) are themselves enough reason to watch the show, but the story and characters sustain interest to the end. The season ends on a note that could itself be a pretty great conclusion, but I’m curious to see the direction the show goes in its second season.

Oh, and it’s got Ed Harris and Anthony Hopkins too.

Although, if I’m being honest, I’m not sure which one is a more compelling sell.

My to-do list is already bloating before my very eyes, so I haven’t spent as much time doing fun things as I’d like. In my spare time, though, I’ve been trying to get in as much exercise as possible before my weeks become crushingly busy. In addition to running, which will forever be my favourite way to slow down my inevitable decomposition, I’ve also been going to boxing classes. 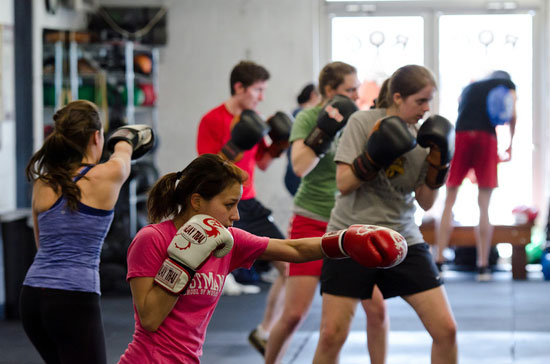 If you know me at all, you’ll know that boxing is a weird and terrible fit for me. I value my brain too much to ever actually invite other people to punch my skull, and I am clumsy even at the best of times. But there’s no actual hitting other people (or being hit), the class environment is good motivation, and the balance between upper body exercises and technique keeps it interesting. Plus, the class generally has more women than men, so the bro-quotient (brotient?) is low. If anything, paying attention to my balance and movement has made me a little less clumsy, just barely. And judging from how much I sweat, it’s a great workout. If you’re looking to join a workout group, there are worse ways to go than boxing. Give it a shot.

That’s it for us, friends. Have a great long weekend, and see you on the other side in the new (school) year!