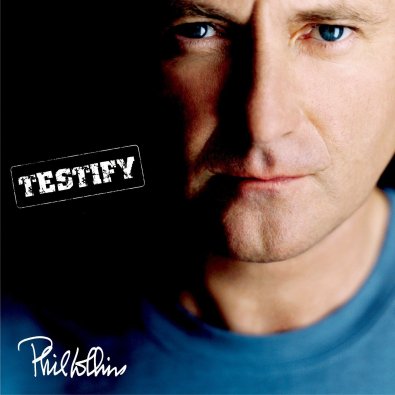 Phil Collins’ seventh studio album, Testify, was released in November of 2002. It debuted (and peaked) at No.30 on the American Billboard 200 albums chart. The album would eventually be certified Gold in the UK and Double Platinum (?!) in France (?!?!).

Well, here we are. 2002’s Testify is the final Phil Collins album that features new original material. He did release an album of covers in 2010, but I’m not interested in that for the purposes of this series. So, this is the end of the road.

And what a road it has been! All told, there really aren’t that many Phil Collins albums. And all told, I remember very little of what’s on any of them. Will Collins cap off his career with his most memorable work? I have a sneaking suspicion that he won’t, but let’s dive in and listen to Testify.

Wake Up Call
This song opens with some strangely EDM-influenced sonic elements, prompting me to wonder if Testify is PHIL COLLINS presents OK COMPUTER. From a songwriting perspective, it certainly isn’t. When the song properly kicks in, it is standard Phil fare. The narrative of life passing you by sounds both outwardly and inwardly prescriptive in the same way that most of his music tends to. You feel as though he’s giving you a hard time, when it’s actually clear that he’s giving himself a hard time. Poor ol’ Phil.

While not mind-blowing, “Wake Up Call” is far from the worst of Phil’s catalogue, but also not even close to being a memorable tune. Some interesting production elements, such as the staccato strings in the pre-chorus or bridge section, elevate this track slightly. It is the musical equivalent of margarine, though. I can believe it’s not better.

Come With Me
When the aging pop star says “come with me”, you run.

This song sounds at first to be playing “The Lullaby Song” on marimba (or something), but bails out on that melody before totally copying it. It would have been a really ballsy move and kind of an interesting meta-commentary on how boring all of latter-day Phil Collins music is. But instead, “Come With Me” is a typically plodding toothless ballad. At some points, it sounds like the Edge from U2 is plunking around in the background, which only makes it all seem shittier.

I can’t imagine what it would be like to hang out with someone who thought that this was a good song.

Testify
Given that this album’s title track sounds like a parody of an 80s sexy love-ballad, I now have a pretty strong hunch as to why this album may have tanked in 2002. The “gospel” singers littered all over this track sound like a tasteless joke.

When the key change arrived and I realized that the song was only half over, I got around to feeling something akin to joy that this was Phil Collins’ final album of original material. If you heard this song being played in a local department store, you would burn the store down and spend your entire prison term thinking about how it was totally worth it.

Don’t Get Me Started
Phil has official entered the “you know what really grinds my gears” phase of his career. The funny thing about when people say “Don’t get me started…” about something is that they say it totally wanting someone to get them started and then for everyone to listen to their old man ideas.

Although this song contains a very tasty Phil Collins drum fill near its conclusion, it’s almost otherwise devoid of elements of interest. It also ends with a fade out, which presents me with the possibility of some nightmarish scenario where this song actually never ends. Jesus Christ, no.

Swing Low
If you were hoping to hear Phil Collins’ take on Dido’s take on Portishead, I have very good news and very bad news. The good news is that “Swing Low” is exactly that. The bad news is that you are now on a watch list that I’ve been keeping of people who exhibit dangerously bad judgement and should be kept out of positions of power.

Just like Dido, this song is lame during its minor key sections, and unbearable when it shifts to a major key. The attempts to ape classic trip hop trappings like sonically degraded recordings of brass instruments are rendered inadvertently hilarious by the fact that they’re obviously just synth trumpets. Because this is a Phil Collins album, after all.

It’s Not Too Late
This song sounds like it’s trying to piggy back on the success of Shakira’s “Whenever”, which was released the year prior. It’s like Shakira mixed with Celine Dion’s “My Heart Will Go On”, but without being as interesting as either of those songs.

All of these songs sound like an artist really struggling to put together memorable tunes, unwilling to accept the fact that it’s just not happening. Maybe it is too late for Phil. This album is limp AF.

This Love This Heart
Oh, good Christ, this is embarrassing. Cringe to the sound Phil’s little breathy whisper voice wheezing out the worst sub-Hallmark card poetry over top of the most tired-sounding four chord pop ballad background.

How many of these songs are going to be attempts at a hit ballad? This album sounds like it was written and recorded on piles and piles of Xanax. It was post 9/11, so maybe it was? Who knows. This sucks.

Driving Me Crazy
Okay, while Phil’s attempts to incorporate millennium-adjacent pop music elements are all super misguided, they’re at least kind of funny to listen to. “Driving Me Crazy” features some pretty wild soft disco EDM elements that are all pretty goofy and fun. Perhaps it just sounds interesting because everything else on this album so far has been coma-inducing, but at least it sounds like he’s trying something here.

This song also sees a welcome return of unhinged Phil, reminding me of the glory days of the Collinsverse. I’m not sure of who he’s singing about, and I can’t say for sure that it is about his ex-wife, but who else has been able to make ol’ Philly say bonkers things like “There’s no escaping me / I’m with you while you sleep”? You can’t say things like that to people, Phil! Technically you’re not even supposed to say things like “crazy”!

This song is a mess, but it was a mess that I could pay attention to.

The Least You Can Do
Somebody’s playing games with Phil’s heart, and consequently Phil is playing half-baked runs on a synth … uh… bagpipe fiddle? Who knows. Sounds bad.

In this song, Phil lays out no fewer than four things that he expects someone to do that would be the “least” that they could do. I don’t think it works that way. I think if you present someone with something that is the “least” that they can do, you can really only list one thing. Let’s get real, the least that she can do is nothing, Phil. Don’t get greedy.

The nice thing that I can say about this song is that it is only four minutes long.

Can’t Stop Loving You
Can you honestly tell me that the opening line “So you’re leaving in the mornin’ on the early train” doesn’t sound like what you’d come up with if you were going to make fun of singer-songwriters like Phil Collins? It’s the kind of ridiculous love song pastiche that is impossible to take seriously, even when it seems to be delivered with sincerity. There are computer algorithms now that write less mechanical lyrics than this.

Lyrics aside, this is the only song from this album that sounds familiar to me, and it is the only song on this album with a strong and memorable hook. I’m not saying that it’s good, but it’s at least delivered with some degree of confidence and competence. Pretty boring video as far as Phil Collins videos go, though. Snooooore.

Thru My Eyes
I swear this is a carbon copy of an earlier Phil Collins song, but I’m not willing to go back and find out which one. What it really sounds like is a third-rate Phil covers Graceland outtake. Nearly every vocal track on this album sounds like it was recorded with Phil lying on a couch, eating spoonfuls of ice cream in between lines. Dude’s heart isn’t into this.

Collins was 51 when this was released. If I sound this tired and tuned-out when I’m 51, just put a pillow over my face. Yow.

You Touch My Heart
The only consistently enjoyable thing about the last handful of Phil Collins records are the sections where he’s just noodling around on an improvised synth line as if he thinks he’s doing a job. There are a bunch of moments like this on “You Touch My Heart”, and they literally just sound like something I’d do on a keyboard while a song I’ve never heard before was playing.

This song is so half-assed that it ends with 30 or 40 seconds of Phil mumbling a melody while saying “hai yai yai hee yai”. It’s as if he hit track 12 and thought “there’s no way anybody is still listening to this”. Unfortunately, I was still listening. And I hated it.

This album sounds the way that a glass of Sprite tastes when it’s been left out on a counter top for a few days. Flat but sickly sweet, and probably full of dust particles and maybe a few fruit flies. Only one of the songs has a memorable hook, and 90% of the album is delivered at a pace that can only be described as languid.

This gives Collins’ previous album a run for its money in the race for “Worst Phil Collins Album” and serves as an absolutely dismal capper to his career. I’ve never liked the guy’s music, but the extent of his creative bankruptcy is actually very sad. Even to me.

I’ll return soon with a ranking of all of his albums, not all of which were quite so… well… rank.