So yesterday I decided to run thirty kilometres, as a warm-up for a race I’m doing in a couple of weeks. After the thirty, I was still alive (although the tendons in my legs were tight enough to play like guitar strings), so I thought I’d celebrate outrunning my own mortality by drinking some alcohol.

I bought a pumpkin beer. Yeah, yeah, it’s not October. You know what I say? It’s the best time to drink this shit, when people aren’t infusing every single edible product with pumpkin spices.

Dogfish Head is a relatively well-known American brewery out of Delaware that makes the 60-minute IPA, one of the few hoppy beers I enjoy drinking regularly. I chose their Punkin Ale because of this track record, and because their pumpkin was a brown ale, and because of the label. Speaking of… (I’ll use Mark’s beer review method because I don’t know shit about beer.) 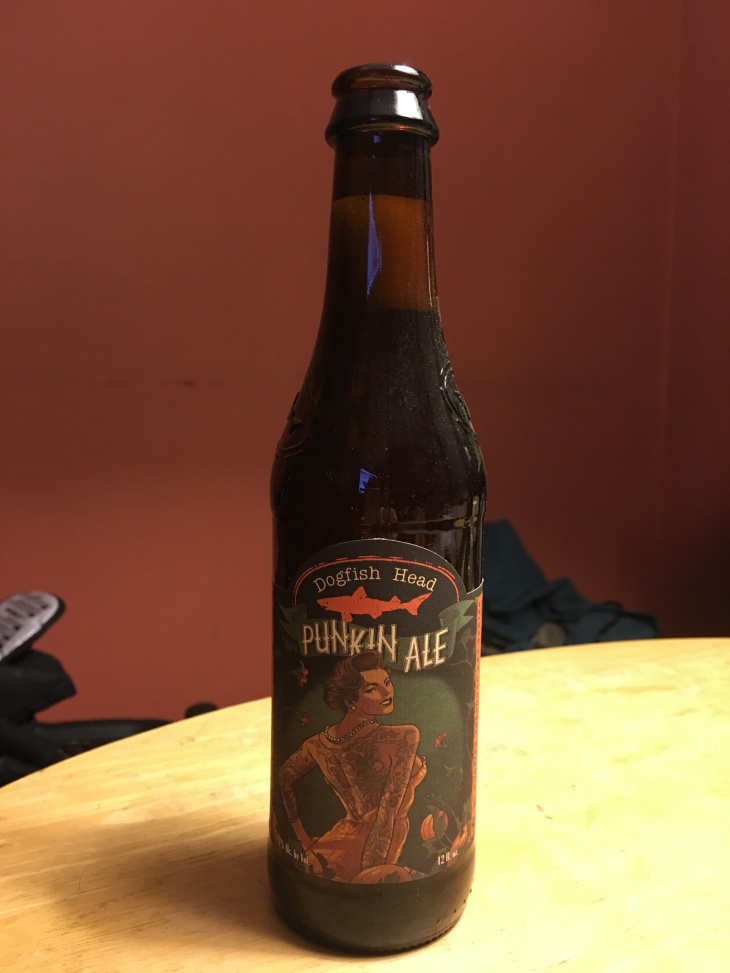 The Bottle: What can I say? I’m a sucker for a well-dressed lady with tattoos. The bottle was a standard 355mL, which means I can titrate my intake instead of feeling like I have to pound back an entire bomber or growler. It came in a four-pack, which is the Dad Rock of case sizes. Apparently I’m a dad now, so the four-pack worked for me just fine.

Colour: Definitely brown. I don’t know. Good? It looks like beer, and was dark enough that the colour made it seem more delicious. I’m not above chicanery.

Flavour: Better than expected. Most pumpkin ales rely on the spices to give the beer flavour; this was an actual delicious beer with hints of pumpkin and spices. It was malty, dark, and just the right amount of bitter, and I suspect I would have enjoyed it as much without the pumpkin additions.

Verdict: The next time I’m at that particular liquor store, I’m going to pick another four-pack up, and not just because the label makes me swoon. That’s as good a recommendation as I can give.

In general, Dogfish Head seem to make some pretty tasty beers. Not sure how available they are in Canada, so I plan to exploit my time in the States by drinking them with irresponsible frequency. Come have one with me, sometime.