From the mid-70s through to the mid-90s, there existed a magical block of television airtime solely dedicated to children’s programming. Saturday Morning Cartoons were the be all and end all of the entertainment world for some of us, giving us something to look forward to each week that was legitimately for us and giving advertisers a period of about 6 hours each week to fill our heads with things to ask our parents for.

Everyone was happy. Except for the parents. Because parents are never happy.

Not every Saturday morning cartoon was a winner. For every Animaniacs, there were a half-dozen Raw Toonage–caliber programs. For every Teenage Mutant Ninja Turtles, there was a Wild West Cowboys of Moo-Mesa. Some of the most dismal mediocrities came out of the animation salt mines of Canada. Canadian studios acted as guns-for-hire for a number of highish profile work – including The Care Bears, Beetlejuice and Inspector Gadget – but are largely remembered for shows that felt really Canadian. You may recall such dreck as The Adventures of Teddy Ruxpin or The Raccoons (come on, it was terrible, come at me).

One such show – perhaps the dreck-iest – is The Smoggies, a patently bizarre and creepy program that seemed to be trying to capitalize on the late 1980’s rising tide of environmental activism, while also trying to establish a marketable set of little adorable creatures along the lines of The Smurfs. Running for just two seasons, the show is barely a footnote – the insipid theme song (featured below) is what seems to be most remembered about it.

I’ve decided to take another look and decide whether or not this show has been deservedly forgotten or if perhaps it is actually a valuable artifact, unjustly ignored by our fickle and feckless cultural meat grinder.

Take a look at the introduction tacked onto the beginning of each and every episode of The Smoggies. It was typical of the television shows of this time period. Unlike the sleek and short title sequences that seem the norm today, this thing eats up nearly a full two minutes of air time. It accomplishes two things: It absolutely beats its audience over the head with the show’s premise and it saves the production company 2 minutes of new animation per episode. Over a 12 episode season when filling a half hour time slot, that’s like getting an entire episode for free!

Before watching each episode of The Smoggies, we’re brought back up to speed with what’s been going on in the show’s universe. As this clip summarizes the overarching plot of the show, there is a surprising amount to unpack here. So let’s go ahead and unpack it!

The Smoggies’ theme music is a viciously upbeat earworm and I’m not going to spend much time analyzing it. If you’ve heard it, you know all that you need to know about the vibe that the song is attempting to establish. We’ll take a closer look at the implications of the theme’s lyrical content.

The first verse asks the viewer if they have had an opportunity to meet the titular Smoggies. It is not made clear if the Smoggies are a family or an organization or what affiliation they have with each other beyond a fondness for pollution. Unlike the Suntots, who seem to be a specific species, the “Smoggie” designation almost appears to be a pejorative, albeit one that the Smoggies themselves are comfortable with using.

The Smoggie in charge, Emma, appears to be romantically involved with Clarence, the Captain of a sailing vessel named “The Stinky-poo”(To name a ship “The Stinky-poo” seems a little on the nose for a crew of exuberant polluters, but we live in a world that nearly had a “Boaty McBoatface“, so…).  Statuesque but severe, Emma appears to be using Clarence for his boat. The show doesn’t often get into the more complicated dynamics at play in this relationship, but the subtext is obvious and colours every decision that the pair make. 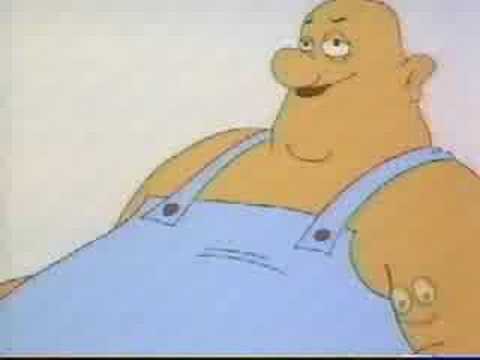 Slightly more perplexing is the character of Polluto. While his name seems to be a take on other cartoon-world heavies such as Bluto from the Popeye universe, in appearance and function Polluto seems to be a parody of the cognitively disabled, the unattractive and the obese. Think Sloth from The Goonies, but without the benefit of being on the winning team or of having any moments of vindication. Polluto seems to just walk around confused for the majority of his screen time, and the show just treats him terribly. His best friend is a bird named Robin Ralph who is not a robin. I believe that this is an attempt by the show’s creators to further humiliate this character for his intellectual shortcomings. Terrible.

The stated purpose of the Smoggies is to create pollution, which seems fairly suspicious to me. It seems to me that pollution – while terrible – is generally a byproduct of some pursuit of wealth or development, not a end in and of itself. This appears to be an attempt by the show runners to skew audience perception toward the Smoggies in a negative way as quickly as possible. The true aim of the Smoggies is revealed in the second verse of the theme song, which also serves to introduce the Suntots.

The Suntots are – ostensibly – the heroes of this program. They appear to be a either a civilization of human dwarves or a human-esque species of diminutive stature. This is never clearly stated. It is, however, stated that they are “a neat and tidy crew”. It would appear that the Suntots’ civilization is based on environmentally sustainable industry and some form of green energy production. This is all well and good, but alarm bells need to trigger upon hearing their claims of immortality and promises to provide it to others.

The Suntots’ claim – “we’ll stay young forever, and we want the same for you” – and the later reveal that they possess “magic coral” that imbues them with this purported immortality immediately brings to mind the false promises of cult leaders from Jonestown to Scientology. The dubious prospect that a magical coral should keep anyone alive in perpetuity should be called into question by the existence of an elderly Suntot (Uncle Boom). His advanced age contradicts the plainly stated claim of eternal youth. It is likely that Uncle Boom is one of the leaders of the Suntots and has a hand in managing the population to ensure that these questions are not asked.

The “magic coral” that the Suntots claim to have in their possession is revealed to be the ultimate interest of the Smoggies. They create pollution, yes, but they do so in the pursuit of resource extraction. Magical coral of this sort could easily be synthesized and marketed. Great profits could be realized and many lives could be changed by the amazing products produced as a result of a magical coral industry. Considering all of this, something becomes clear.

The Smoggies are not the villains of this show.

For one, the show is actually named after them. This show isn’t called The Suntots. We tuned in and watched The Smurfs, not The Gargamel Show. It wasn’t Noheart and Beastly’s Variety Hour. It was The Care Bears. The heroes of these stories have the stories named after them. This show is called The Smoggies and reason dictates that they be the heroes of the show.

Second, the Suntots are terrifying. They all dress the same and have the same hair. They want to invite you to their island and to get you there, they’ll sell you a pack of lies about living forever. They have names like Chip, Speed and Sport. They have a princess named Lila, but seemingly no other civic structure.

Just look at this guy. Do you trust this guy? 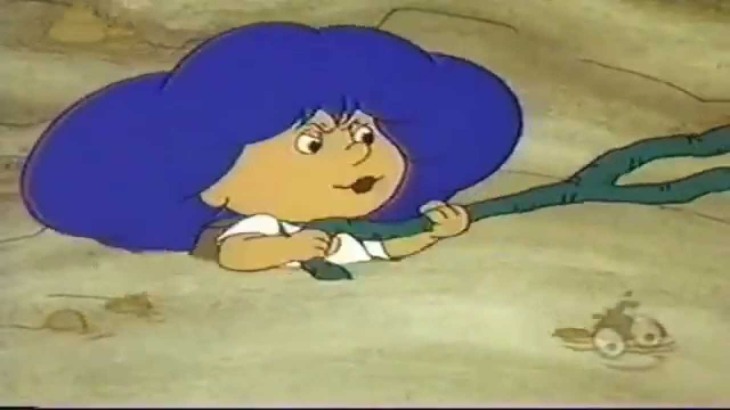 It seems apparent to me that this show needs to be reevaluated, not for quality, but for content. It is evident that this show is not the gentle environmental fable that we have commonly accepted it to be, but is instead a harrowing allegory of the struggle of rugged individualists resisting the oppression of cult-like collectivist/communists in the pursuit of the advancement of both personal profit and the mankind as a species.

Given that I have established the theoretical framework from which this program should be reevaluated, I shall now give a reading of the first episode of the series (conveniently located on Youtube).

…I got three minutes in and had to stop watching. This show is really bad, guys.