When poking around on STEAM recently, I noticed that the Sega Genesis Classics Collection was on sale for 66% off. Having grown up a Genesis kid instead of a SNES kid, my nostalgia receptors lit up like Xmas lights and I purchased it immediately. In this series, I’ll play each game from the collection – in alphabetical order. We will take a journey through the strange technological ghetto created by the glory years of SEGA.

Alex Kidd in the Enchanted Castle – 1989 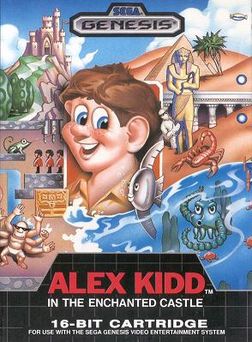 Alex Kidd – he looks like a Keebler elf on the cartridge box, but more like a midget werewolf from a sixties head-shop in the game itself. What’s this Kidd’s story? I’ll be up front with you. I didn’t fucking stick around long enough to find out.

The game starts out promisingly enough, with this bright and well-animated intro. Alex demonstrates that he is, in fact, a “kidd” by riding in on his Big Wheels tricycle and then bouncing by in the other direction on a pogo stick.  Then he’s joined by an old man and a middle-eastern stereotype and it all seems very happy and positive. He even flashes a peace sign. It’s enough to get somebody excited to see this “Enchanted Castle”.

We begin our journey on what I presume to be the road to the Enchanted Castle. I didn’t wind up finding out. Alex is purportedly a “kidd”, but he handles like he’s super, super wasted. The game seems to mostly just be about trying to weave a drunk peace & love werewolf through traffic while punching boxes full of money. It’s pretty true to real life, though, because when you get hit by a car you’re basically fucked. But then there’s bird-sized planes and also where is this even taking place?

If you go into any of the buildings, a gorilla who hates you will immediately challenge you to a game of Rock Paper Scissors… to the death. The loser gets crushed by a giant weight. The winner gets a necklace. Even if you win fair and square, the gorilla will accuse you of being a thief. This makes me wonder things. Not as much as I’m wondering where the gorilla got his pink shorts, but still… I wonder things.

If you get to the end of a level, you collect what appears to be a rice ball. What any of this has to do with castles, I have no idea. Trying to maneuver Alex through the streets is a nightmare, though. Maybe playing drunk would make it easier? Run my own body on a parallel wavelength to Alex’s?

I did eventually collect the rice ball and move on to the second level. The second level is not a castle. In fact, it is even more rural than the previous level. I feel like I’m moving away from the castle. Anyway, I didn’t bother to keep trying. I didn’t want to struggle through guiding a drunk middle-schooler through increasingly pastoral scenes only to discover that the Enchanted Castle was me all along. This kidd sucks.

Modern Day Grade: F
This game is completely unplayable and unintelligible. A relic from a time when only the barest minimum of effort was made in trying to bring games to North America from Japan in a way that seemed anything other than bizarre. This can be hilarious and enjoyable if the game is fun to play. In this case, though, it just feels like waking up naked in a pool of your own vomit in a foreign city, groping around for help and money only to be creamed by indifferent motorists and bird-planes.