Josh: Green Day once said: Wake me up when September ends. But I would prefer if we could go to sleep when September ends and wake up at the end of March, because there’s nothing good in between*.  Christmas is an inevitable disappointment and there are six months of varying degrees of shit weather. I don’t acknowledge the existence of Fall, because it’s just a worse, less committed version of Winter.

Alas, friends, we are not bears, and are not biologically or socially gifted with hibernation. We are anxious meat sacks who must fill our winters with some manner of distraction to ward off the creeping tentacles of cabin fever and seasonal depression.

What’s been distracting you this week?

Jay: While I’ve been leaning on a little distraction this week, I’m going to note that I am a) a sadist, because I love the colder half of the year as much or more than the warmer half, and b) a masochist, because I moved somewhere famous for its lack of snow and cold. (That said, it was a beautiful, blustery winter in Vancouver last year, and I hope it happens again this year.)

After the happy revelation during New Music Monday this week, I’ve been digging into the new Godspeed You! Black Emperor album. Luciferian Towers is replete with fun song titles like “Bosses Hang”, and the music affirms what I said on Monday: Godspeed’s post-hiatus output has been superb. I’ve also taken that Circa Survive record for a spin, and it’s fine. 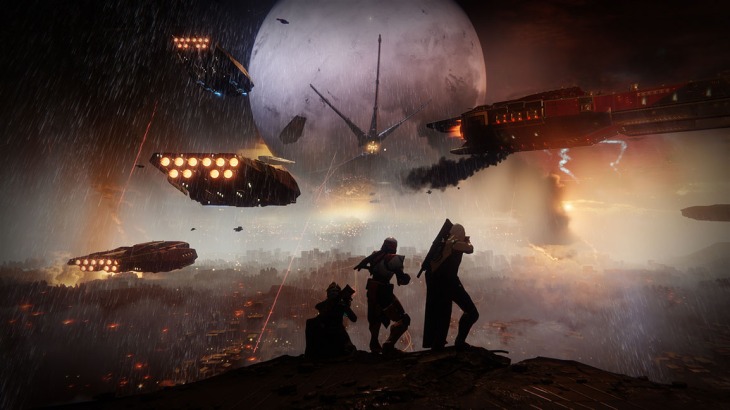 In my spare time, I’ve played a couple of hours of this season’s first big video game release, Destiny 2. It’s… fine? It’s probably not for me. In Destiny 2, you and your video-game-playing friends organize virtual hangouts and shoot nondescript sci-fi aliens as you try to reclaim Earth and a weird, benevolent ping pong ball that floats above our celestial home and gives superpowers to humans. The world, while potential interesting, is so sidelined behind an awful story with stupid characters and terribly half-baked plot points. But the shooting feels good, and it generates new and better gear when you kill bad guys, and those two things are enough to get my friends addicted to the “shoot and loot” grind of the game. If I had buddies who played at the same time as me, it might be interesting, but as it stands, I am as thoroughly out of this pop culture phenomenon as I am with Macklemore and Kesha.

How about you, illustrious colleague? Finding time and space to do fun things before you venture off into the unknown?

Mark: Well, I finally managed to catch Ben Wheatley’s Free Fire, after having missed it at last year’s TIFF and snoozed on it during its initial release. This movie fucking bangs (pun intended). You wouldn’t think that a move comprised entirely of one unbroken gunfight could sustain an audience’s interest, but the flick is so charming and funny and the choreography full of such relentless ingenuity that it’s an absolute joy. Easily one of the most enjoyable films I’ve seen this year, and I’m considering giving it a second spin.

While I’m on the topic of things that bang, I missed chiming in on the new Metz release on this week’s New Music Monday. To be honest, I read Josh’s review before I had heard the album and I was a bit skeptical. I had heard a few tracks off of the album and didn’t think that it was anything too special. Upon getting my hands on the record and giving it a proper listen, I’m inclined to agree with Josh’s assessment. It really may be their best record yet, expanding on their bag of tricks without losing the trusty tricks that have paid off so well for two albums. It’s their most varied release, the production is great. And it baaaaaangs.

So, hats off to you, Josh. Now what have you been up to?

Josh: I’ve been playing Strangled Light, the debut record from post-hardcore supergroup Less Art, a lot this week. It came out back in July but it didn’t really wow me until I picked it up again a few days ago. The outfit features members of Curl Up and Die, Thrice, and Kowloon Walled City—Less Art is an extension of the baseball-themed joke grindcore band Puig Destroyer, who have songs with titles like “Batflip,” “Mike Trout,” and “No One Cares about Your Fantasy Team.”

But Less Art isn’t joking around.  They’re loud, it’s angry, and deeply introspective. I dig heavy music that matches its musical aspirations with lyrical ones. The 9-song album tackles topics like fearing one’s own mental lineage with the vivid imagery of cleaning blood off the walls after a suicide. It’s dark and often hopeless stuff, but only inasmuch as it acknowledges that the world can feel dark and hopeless sometimes. Especially lately.

Less art are in the vein of MewithoutYou, Jawbox, and Fugazi. With yelled vocals, melodic guitars, and Riley Breckenridge’s reliably great drumming, Less Art are putting the best of their members’ respective genres to explosive and cohesive use. This is good shit.

I would like to issue a retraction to my last week’s endorsement of the show Outlander, which I had only watched a few episodes of at that point. What starts with an interesting concept that is executed well takes a sharp turn in the latter half of season 1, in which it becomes apparent the writer of this novel is, herself, a time-traveler from the 1940s. Even by the standards of 1991—when the Outlander novel was published—the characterization of a sadistic queer boogeyman is uncomfortably retrograde. By 2015 standards it’s unconscionable, and I can’t believe it made it into the show. The villain in Outlander makes a half-century of notoriously-cartoonish Bond villains suddenly feel more realistic. It’s like someone watched Game of Thrones and thought, “how can I make Ramsay Bolton but an offensive caricature?” And it makes the last half of this show’s first season borderline terrible.

I’m going to keep hate-watching and hope it gets better, but I don’t recommend you do the same.

Finally, join me in saying so long to Mark for a couple weeks. He’s off to travel the world, so expect a massive (and massively exciting!) travelogue post coming sometime in the back half of October. We’ll miss you, Mark!

* Fine. I’ll grant you Halloween is pretty rad, but mostly as an excuse to watch scary movies.