Mark: September has been bolting by like a bat out of hell, and what do we have to show for it but slightly less hair and still no money?!

We must, however, give our weekly thanks to the gods of distraction, as they bestow upon us the soothing ointments of their indefatigable content farms. What say you, friends? What have you been consuming to drown out the deafening klaxons signalling our mutual oncoming demise?

Jay: Jesus, I’ve been so busy I haven’t had time to think about my oncoming demise. Thanks for reminding me, jerk.

When not utterly crushed with things to do, I’ve been chipping away at video games to keep myself balanced (and to avoid talking to human beings, so as to rejuvenate my social capacities). If you haven’t heard me say this enough on the site, we are living in a very, very good time for games. Unless you’re the type, there is no reason to while away your time on bro-heavy hyper-realistic military murder simulators. Smaller studios are putting out first-rate, thoughtful, clever, interesting games faster than they can be played.

Absolver is a game where you wander a world of beautiful ruins, besting foes as you move from checkpoint to checkpoint, and with interesting world-building around the periphery and in the small details. If this sounds like Dark Souls to you, you’re not mistaken; this game is obviously inspired by my favourite game series, but unlike previous copycats, it actually offers a few new ideas: it’s pretty and naturalistic instead of grotesque; it’s a clever martial-arts game that allows you to design your fighting repertoire; it trades sword and sorcery nonsense for a maybe post-apocalyptic thing (although again, you can ignore story altogether if you have no interest in piecing together the world details for clues). And cleverest of all, it’s a little easier than Dark Souls and doesn’t outstay its welcome: this little gem is modestly priced ($35-ish) and is over in under ten hours, unless you want to stick around and compete with other players in some martial-arts duels, which is surprisingly fun.

In contrast, Hellblade: Senua’s Sacrifice takes video game tropes like insanity and grief and lends them a legitimacy you don’t normally see in the medium. The very first credits in the game are for a mental health consultant and a history consultant, and it shows. The game revolves around a Pict woman in ancient times who has the positive symptoms of schizophrenia, reconciling the loss of her lover to Vikings and travelling to the underworld to save her lover’s soul. There is some fighting in the game, but very much so it feels like a battling of inner demons, and most of your time you are walking and solving puzzles in the harsh northern environment. I would be remiss if I didn’t mention that this is probably the most stunning visual and auditory presentation I have seen in a game maybe ever: the motion capture and expressive visage of your protagonist are second to none (no dead-eyed video-game stares here); your earphones (the way they encourage you to play) are swirling with voices in your head, expressing your doubts, anxieties, mania, self-criticism; and between the vistas and clever editing, the visuals themselves are absolutely gorgeous. Despite this being an independent studio, Hellblade‘s production values really are the best of the best. Like Absolver, it’s price and length are more modest than the bloated AAA games you may be more familiar with. If you have a PS4 or a decent PC, please play this game. I’m looking forward to watching the companion making-of/documentary that’s embedded in the title page of the game, as soon as I face the devil herself and reclaim my lover’s soul.

Josh: I, on the other hand, don’t need this guy to remind me of the ever-encroaching spectre of death, a topic I couldn’t forget even if I tried. But I still tried! This week with lots of television. 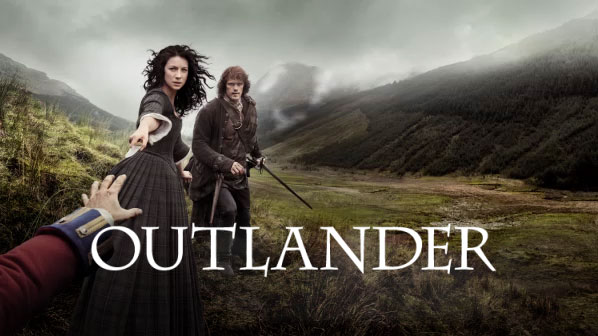 To fill the lengthy gap between seasons of Game of Thrones, the wife and I have started watching Outlander. It’s similarly filled with accents, violence, and references to cocks, but with fewer dragons. This show, adapted from the novel series by Diana Gabaldon feels like Game of Thrones written for women, a sleazy bodice-ripper of a wartime epic that treats itself with the importance of Jane Austen. Which is kind of great? The series, created by Battlestar Galactica’s Ronald D. Moore, looks gorgeous and gives scenes a lot of room to breathe. The lead actress, Caitriona Balfe, is great as an accidental time traveler who gets herself stuck in the 1700s in the middle of the war between the Scottish and the English, where she comes face to face with the brutal ancestor of her own husband. It’s a story of shifting allegiances, complicated questions of romantic loyalty, and delightfully pretentious sex scenes tailored as much for the female gaze as cable TV will allow.

I’ve also been working through Star Wars: The Clone Wars slowly for several years now, but with the warning—helpfully and tauntingly delivered at the beginning of every episode now—that the series will be pulled off Netflix on October 7, I’ve been burning through it at a twice-per-day rate. This show is pretty fantastic, and I think a must-watch for anyone who truly considers themselves a Star Wars fan. Set between Episodes II and III, its prequel premise might turn off those who don’t abide that trilogy of films, but it explores the period in much more interesting and innovative ways than most of those three films are. We get to see a lot of complex interactions between planets caught in the middle of the Republic-Seperatist war, and the series adds a lot of moral greys that the prequel films just scratch the surface of. Characters who are just kind of dropped into the prequels with little context (like Dooku and Grevious) are fleshed out here. The series gives us a great new character in Ahsoka Tano, a young Jedi apprentice under Anakin Skywalker, who comes into her own over the course of the series. I’m interested in finding out how they “write her out” of Episode III, which was released before the Clone Wars was conceived.

The animation is a really beautiful, soft and colourful CGI style that almost looks like these characters are molded out of plastic. But best of all, we get so many different stories here and so many different kinds of stories that are very different from the films. Seasons 4 and 5 are especially great, with several mini-arcs that rank with the best of the Star Wars films. If you’re a Star Wars fan who wants more stories in that world, check out The Clone Wars. Unlike the dozens of (mostly bad) old Extended Universe novels, this series hasn’t been excised from the new Disney Star Wars canon, so watching it will keep you up to speed on the history of the world the new films are set in. You’ll even learn how Darth Maul survived the end of The Phantom Menace and the bizarre places his character went from there.

Mark: I didn’t wind up taking in much this week, beyond old episodes of NewsRadio and podcasts. On Thursday, though, I had the pleasure of going to see John Mulaney perform an hour-long comedy set at Toronto’s Just For Laughs Festival. I love Mulaney’s work, and was delighted to hear a full set of all-new material.

Live comedy has become one of my favourite treats. There’s something contagious about watching a comedian with a live audience. Time seems to slow down (in a good way) as you get drawn into some kind of contagious group-think with everyone around you. I wind up feeling happy and exhausted and sore-faced. It is generally money very well spent.

If you haven’t caught any of Mulaney’s other sets, I would encourage you to do so. He’s one of the current greats. I’ll leave you with a clip of one of my favourite bits! Enjoy your week!