It’s St. Paddy’s day! What better way to celebrate than to stay in, avoid the crowds of young people, and enjoy a nice Irish (style) Brown Ale. Not a real Irish Ale, mind you. One made in Oakville, Ontario.

The Trafalgar Club is a brewing company that I’ve never heard of. They’ve been around since 1993, from what the internet tells me. I can confirm that these people get up to a lot of wacky alcohol activities. Where most craft breweries would be content to just crank out a pile of high-octane IPAs and watch the hipster bucks roll in, Trafalgar traffics in beers, meads, assorted spirits, custom whiskies, and moonshine. Yes. Moonshine. Even fancy moonshine. I’m ridiculously intrigued by this company, after doing some quick research, and hope to get to Oakville for one of their Sunday tours at some point in the future. 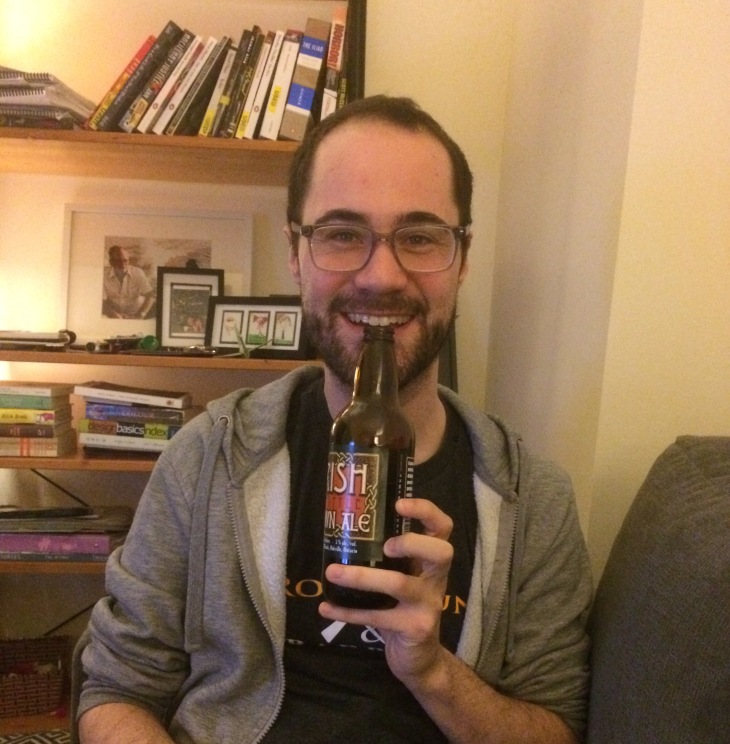 I happened upon Trafalgar’s Irish Style Brown Ale at the LCBO on my way home from work this evening, and decided that it would be a good bet to kick off the beer reviews on The Fraudster’s Almanac and simultaneously celebrate a really stupid arbitrary “day”.

The Bottle: The 500ml bottle is nice, and is a break from the typical tall can. The label design isn’t the most contemporary – maybe a little tacky. It manages to land somewhere in between campy and classy, without achieving either of them.

Colour: Poured into a glass, Trafalgar’s Irish Style Brown Ale is indeed brown – a very nice brown at that. Very little head, although it is immediately evident that it is fairly carbonated.

Flavour: This beer is quite tasty! Not as sweet as some brown ales that I’ve tried, and not as nutty. There’s a distinct hoppy soapiness to it, reminiscent of a more bitter wheat beer. Easy drinking, but with a pretty interesting richness.

Verdict: If I had two of them, I would have consumed two of them. And not just because I have a mild alcohol dependancy.

Trafalgar Irish Style Brown Ale isn’t earth-shattering, but it’s very pleasant and drinkable. As mentioned previously, I’m very interested to see what else this company has to offer.

And now I’m literally drinking Jameson Irish Whisky because YOIO, right? (You only Irish once)