If you’re anything like me (and I’m sure that you must be!) what you’re used to doing is sitting around on your ol’ flat ass, bathed in the glow of at least two electronic screens. Why, I spend so much time just honkin’ on that information super-highway, I sometimes forget that there are other things to do! There are even other things that some people like doing. I know. Sounds a little fucked. But stay with me.

In this series, I’m going to review what it’s like to do things that people like doing – even if they’re things that I haven’t traditionally enjoyed doing. Like going outside. Or talking to people with my mouth. Ew.

This weekend, as a way to celebrate my 34th fucking birthday (ew), my enchanting partner and I travelled to Sandbanks Provincial Park in Prince Edward County, Ontario for a camping trip.

Here’s how that went.

In order to get to Sandbanks Provincial Park, you need to acquire a vehicle of some type. Walking is out of the question, because in Canada we get almost no vacation time and weekends are only something like 3 hours long. Thanks, PM Trudeau.

The fastest route to the park from Toronto is Highway 401, a terrifying hellscape of concrete and roadside food courts that seems to have sprung out of Stephen King’s reject pile when he was penning more interesting shit about killer cars or TIME PAC-MANS. I’m a very recently licensed driver, but I shared the driving load on this trip.

The 401 is terrible. I hate it. The trip is very nice and scenic once you exit the 401 somewhere around Trenton.

It is important to point out that Provincial Parks are, in fact, run by the government of Ontario. This means that they’re a relatively safe place to play and stay. It also means that you’re not really going to feel like you’re actually anywhere near the wilderness and you’re going to pay $12 for firewood that you’ll run through almost immediately.

For a short and casual trip, though, the benefits outweigh the gouging and less-than-authentic detriments. There are staff on hand to complain to and there are actual bathrooms that might sometimes get cleaned by said staff. There are rentals to be had – boats and such. They are expensive. Our time there wasn’t flawless and pristine, but it was fairly functional.

This is a place you can stay: 6/10
The value of currency in this place: 2/10
Outhouse fly count: Couldn’t count them. Got distracted by a pair of them that seemed to be mating. But there’s a lot of them, probably.

Camping! (as an experience)

Here I am, looking very hearty and outdoorsy. But also still intellectual, because I can read the park rules aloud while people take pictures of me.

When you go camping, you have to pack a lot of stuff to take along with you. Then that stuff sometimes requires assembly. Take a look at that photo. Behind me, you’ll see what might be one of the easiest tents in the world to assemble. It’s still work. Camping is kind of just a different way of saying work to be less comfortable than you’re used to. But it’s not all bad!

You’re practically required to burn things when you’re camping. Usually you get in trouble for this kind of thing. Out here? All bets are off, man! Unless the bet is “I bet my girlfriend is better at building a fire from scratch than I am, because I can’t actually do that and would die rather quickly if left alone in the wilderness”. Fire is great, and any excuse to have one is great.

I’ll bet some of you were freaking out about that photo of weenies being cooked on a little grill rather than over a roaring campfire. Don’t worry! We did that too! That’s another great thing about camping – you eat like a fucking degenerate and nobody gives you shit for it! We ate hot dogs twice and so many chips. It was disgusting and spectacular.

I will mention this, though: Do not buy the cooking skewer pictured above. It is from Dollarama and is a piece of inefficient garbage. They’re just terrible for getting an evenly cooked weenie, and the weenie will sometimes slip off. We’ve lost whole weenies into the coals, and those weenies therefore went on to haunt the colon of absolutely no one (a travesty).

Camping is pretty fun. It’s not necessarily comfortable to sleep in a tent (even on an air mattress), but there’s something simultaneously adventurous and peaceful about it. Until you add other people into the mix.

If you’re anything like us, you’ll wind up at a campsite next to the most annoying guy on the planet. He’ll get drunk and you’ll have to hear him call his girlfriend “baaaAAAAaaabe” in a whiny voice and then eventually she’ll give in and have sex with him. You’ll hear that too. It will dampen your spirits.

The Beach! (as an experience)

No, I didn’t take this photo. My girlfriend is also better at that than I am.

My aversion to the beach is legendary. I enjoyed it as a kid, but somewhere around high school I became allergic to taking my shirt off in the presence of others and that was that – to me, the beach was for losers.

I’ve been trying to overcome this kind of rotten judge-y behaviour in my life, as I’m sure you’ve noticed from my incredibly open-minded and even-handed New Music Monday reviews. So… I try to go to the beach sometimes. Here are some thoughts about the beach.

The beach is kind of just a pile of dirt next to some water. That’s not a bad thing, but let’s be honest – the beach isn’t super high concept. The sun gets hot and you’ll burn in it if you don’t throw chemicals all over yourself. You should wear a hat, because you’re like me and you’re 34 and that means that you don’t have any hair. The sun also heats the pile of dirt, which makes it hard to walk on. This is because the beach is one of the only public places where you’re basically encouraged not to wear any shoes or socks. Also, people are basically in their underwear, but it’s special underwear so they don’t feel embarrassed.

When you think about it, there are plenty of fucked up things about the way that the beach operates. Culturally, I mean. But kids love it. My nephew didn’t play Clash of Clans once while we were hanging out at the beach together, and that indicates that beach-time is pretty powerful stuff.

You’re not supposed to drink at the beach. People do anyway, because it’s difficult to enjoy anything based on hanging out in your underwear around a bunch of strangers without getting a little tipsy first. You’ve just gotta be discreet about it. This can be a fun game, like playing Spy vs Spy. This adds another layer of fun to drinking, and I can’t even believe it.

One lousy thing about going to the beach – like the one lousy thing about camping listed above – is that you’re usually forced to do it with a bunch of other people. People are a vile nuisance at best.  If you get the chance to hang out on the beach after the crowds have gone and the sun is coming down, though, I suggest that you do it.

It is pretty good.

We had a very enjoyable weekend, and I think I can say with some assurance that both camping and going to the beach can be positive experiences under the right conditions. A fine way to celebrate one’s advancing age.

Before heading for home, we decided to celebrate in a more time-honoured fashion, however – getting together with family in order to eat, drink and enjoy each other’s company. We met up with my family at a restaurant in my hometown of Belleville, Ontario – and had a fairly reasonable dinner on a patio looking out onto the Bay of Quinte. 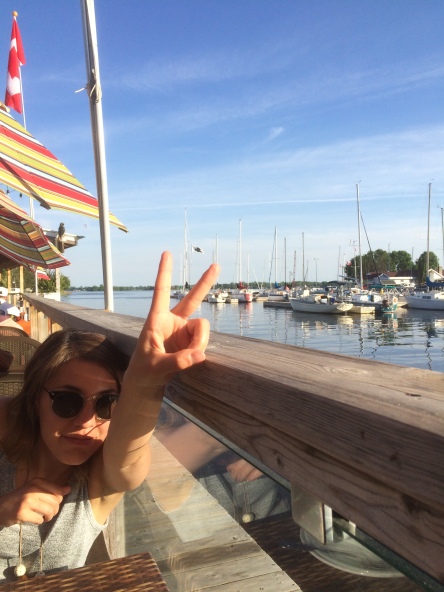 Sometimes it’s fun to do things that people like doing.