My lovely partner, though, is giving the ol’ no-gluten-lots-of-sadness diet a shot – an elimination diet of sorts, at the behest of a medical professional. She vacillates between being okay with it and being despondent, and I’ve been bouncing back and forth between supportive and “mmm yummy bread”. I was heartily in favour of her picking up some gluten free beer, because even people on crazy diets should be able to get their drink on. 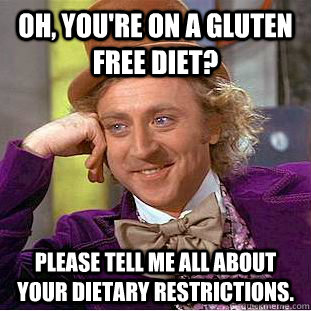 Out of curiosity and out of it being the only kind of beer left in the house the other night, I gave it a shot. Here’s what I thought of Bard’s Gold Gluten Free Beer!

The Bottle:
Standard brown bottle & label combo. The company’s branding is fairly modern and fairly ugly to my eyes, but it is at least apparent that they’ve put some time and money into it. Just look at their website. Fancy! They’re from Minnesota, which makes this the first non-Canadian beer that I’ve reviewed. It may be the last.

The Colour:
This is an amber ale, technically, but the name is accurate in dubbing it “gold”. It’s actually a fairly nice looking beer, judging by the pictures I’m looking at on GIS. I’m looking at those pictures because I didn’t pour the beer into a glass before drinking it like some kind of stuck-up monster.

The Flavour:
This is kind of the rub – I don’t like it. At first sip, I could at least exclaim “Oh. It’s beer.” Over the course of the bottle, though, there were hints of things that I wasn’t into at all. It’s a fairly sweet beer, which is generally a negative for me. There were notes of cherry that seemed kind of medicine-y to me, and kind of a plasticky sheen to the aftertaste. The beer achieves its gluten free status by using sorghum instead of wheat, barley or what have you. I’m genuinely curious as to how much they have to work with it in order to get this drink tasting as beer-ish as it manages to be. Not beer-ish enough for me, but I mean… it’s beer.

The Verdict:
While I would never, ever drink this by choice if there were ever an option to have a different beer, if it were the only game in town that didn’t give me hives or some other crazy symptom, I would probably learn to love it. The folks at Bard’s are doing good work for those that have no choice but to remain gluten free and not kill themselves, but would also like to sometimes have something that is basically beer.

I recuse myself from assigning a star value to this beer, as I’m not sure that it would be fair. But I did drink the whole thing, so it couldn’t have been like, poison or anything.