In recent years, it has seemed that the debate over whether or not video games can function as an artistic story-telling medium has largely been settled. Despite what Roger Ebert may have thought, gaming is now such a ubiquitous and varied form of cultural expression, to conclude that video games aren’t capable of artfully unspooling a narrative points to being a complete fuddy-duddy, or to simply not being willing to pay attention. Or to being my girlfriend. Ha HA! I take that back and immediately regret typing it.

When The Banner Saga was released a few years ago, the presentation of its story was met with deserved acclaim. Here was a deep and involving tale of dark fantasy, rendered with painstakingly hand-drawn personality. The situation of the game world is dire, and in forcing the player to make numerous punishing decisions that test the balance between moralism and pragmatism, it succeeded in making the player feel personally involved in the proceedings and culpable for the fates of its characters. The Banner Saga’s grim slog and bittersweet conclusion left me saying: “Wowee! Now that’s how you tell a story!”

Released this April, The Banner Saga 2 makes me say “Wowee! Now that’s how you make another episode of the same game and make me feel like you’re not 100% sure where your story is going!”

The Banner Saga 2 picks up right where the first instalment concluded. As either Rook or his daughter Alette (depending on which one wound up biting it at the end of the first – omg spoiler), you must lead a rag-tag procession of starving refugees and grumpy giants (called “Varl”) in an eastward journey to evade an ever-advancing throng of terrifying species called the “Dredge” that look like Sentinels from the X-Men cartoon (only made of stone and also kind of like Galactus). It’s more complicated than that, but I’ll not go any deeper with the story elements. It winds up being more compelling than it sounds on paper and often surprises with its ability to avoid heavy-handedness in favour of bleak pragmatism.

The story elements are primarily delivered through a mix of random events and set events that resemble a “Choose-your-own-Adventure” novel. You’re given a series of choices for the ways in which you might react to a situation or to dialogue with other characters. Along the road, you’ll run into battle situations in which you can select up to six fighters from your roster of available characters (basically any of your caravan lucky enough to have a face). The battle gameplay is a fairly idiosyncratic take on turn-based, tile-based strategy. Think Final Fantasy Tactics, but with a strange Strength/Shield tug-of-war health bar system that seems a little too complicated to get into here.

The battle portions of this series suffer a bit from the fact that they never seem very fun or all that strategic. Sure, there are complicated sets of actions, varied unit types (there are fucking horse-people now!!!), and they’ve added a system of destructible obstacles this time around, but any nuance that the strategic battles may have is lost due to the fact that generally your best bet is to stack your team with as many giants as possible and just pummel away. These sections are also the only times that the game feels frustrating and the only time that the game feels unfair, particularly in the climactic matches which hold a few new curveballs that the player is only left to infer.

The more story-based gameplay, a super-robust take on The Oregon Trail, can also feel unfair, but only in the way that life feels unfair sometimes. This is where this series really shines. These games absolutely shower you with despair, and you’ll soon dread making even the simplest of choices. In a medium that so routinely champions heroic deeds, doing the right thing and rescuing those in distress, it is jarring to play through a piece of work so intent on punishing you for attempting to do so. In other series’ (the Mass Effect series, for example), it’s usually a pretty safe bet just to choose as many “good guy” options as possible. Chances are that it’s going to work out for you. In The Banner Saga, you will be rewarded for playing the nice guy from time to time. Just as often, though, your acts of kindness will be revealed to be the totally bad choices that they are. Decide to take in some hungry refugees? Surprise! They’re actually robbing you! Or they put your caravan over carrying capacity! Haha! Now you’re all starving to death! It’s frequently brutal and makes the player feel that their choices are incredibly tied to the narrative. 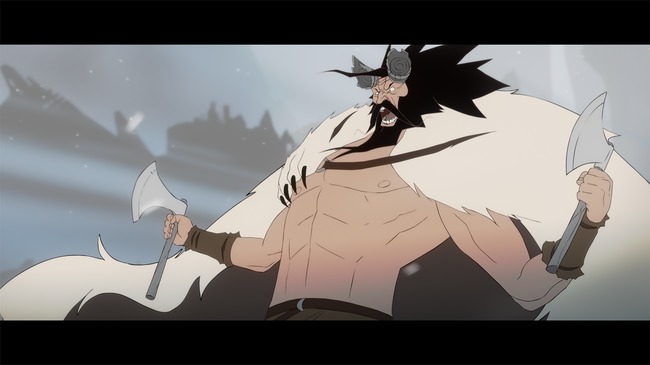 The narrative elements were stunning in the series’ first entry. The Banner Saga 2 is still very good in this regard. The writing is fairly solid, and the delivery hasn’t lost any of its impact in this sequel. I suppose that my main issue with this game (other than the middling combat, which I’m actually fine to put with) is that the story told in this instalment ends up feeling kind of inconsequential. It’s around the same length as the first game, but doesn’t build to a satisfying or logical conclusion that would make it a reasonable stand-alone title. Admittedly, when the credits rolled, I thought to myself: “Oh… that is where they ended this?” Be forewarned, this game ends in a cliffhanger – as the first game did. Where the first game’s ending felt extremely touching and dramatic, however, this one… barely seems to matter at all. I’m hungry for another Banner Saga sequel just to see the series find its way to a conclusion with some heft.

Due to the series’ success and to the fact that the studio making it seems committed to the project, I’m sure that there will be another instalment of The Banner Saga, so my qualms aren’t really such a huge deal. More pressingly, I’ve been wondering about the game’s messaging. Although I’m sure that the way that moral choices are built into series and alternately punished, rewarded or brushed off has been crafted in such a way as to say “life ain’t always fair, bub”… Something about the way that some of the choices play out leaves me feeling vaguely uncomfortable.

Take the example mentioned above: You take in a starving group of refugees and allow them to join the safety of your caravan. They turn out to be murderous thieves. On one hand, it makes sense to include this commentary on human nature in situations of crisis – of course some people are just rotten and will be looting and pillaging and taking advantage of others. But something about the sentiment of the whole thing hews a little too closely to the warnings being bellowed by the worst kind of xenophobic arseholes about refugees from Syria and other troubled regions. I don’t particularly like to see them be proven right by a video game. 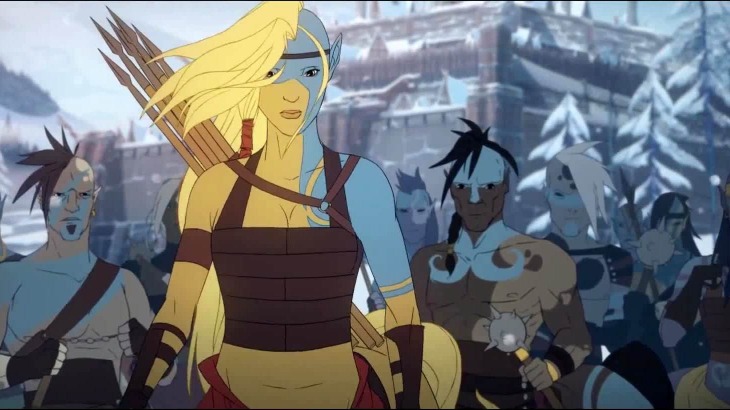 Which brings me to this review’s true click-bait title:

THE BANNER SAGA 2: CONSERVATIVE VALUES BEING TROJAN-HORSED INTO THE MINDS OF OUR CHILDREN?!?!?!?!?!

Watch for it. Hitting Salon.com any day now.