There is an argument to be made for how art is prescient, for how movies and records and games often encapsulate our societal concerns even though those artworks were in production for months or years before the concerns had bubbled to the surface. Since I’ve already dwelled on Arrival and Inside at length, both great examples of such timeliness, I thought I’d explore two new pieces of media and how they seem to capture a similar dread and hopelessness we’re all collectively feeling right now. And, you know, tear them apart a little bit, because that’s what we do around here.

For me, whether these pieces succeed or fail in their respective form is only half of the critique. I admire that these artists had their fingers on the pulse of our societal moods and thoughts, and I admire them for portraying resistance and change in the face of almost overwhelming adversity. More than any other time in my life, the future is grim. Sometimes I may want lighthearted tales of how life can be good, but more so I want stories about resisting the awful future that is looming, even if resistance will result in loss or pain. 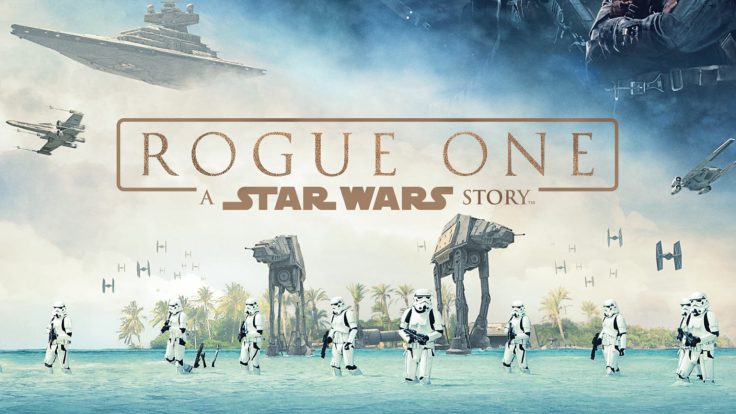 This defiant spirit is probably the best thing Rogue One: A Star Wars Story has going for it. Emotionally, it captures the current geopolitical mess we’re in. Someone (read: fucking DISNEY) fronted truckfuls of money to produce a movie about guerrilla warfare and personal sacrifice against fascism, about hope in the face of our own deaths. They didn’t know about Brexit or Trump or Russian hacking and espionage during filming, but they sure did make a movie about the villains running the show, and how hopeless it feels to be under the boot heels of said villains.

It’s too bad the movie is such a stinker.

I think maybe Gareth Edwards just doesn’t know what he’s doing in the director’s chair. His Monsters was pretty enjoyable at the time, patient in the right ways and appropriately focused on its two leads, but Godzilla was a sack of shit without a firm sense of a character arc. Rogue One fails in the same ways. Despite Felicity Jones clearly being the lead of this ensemble, the viewer never feels connected to her in the essential ways of a story about family and sacrifice. This isn’t at all the fault of Jones, who does as well as she can, but rather a script that never sells us on how she’s competent or why she matters beyond who her father is, and a director who never lingers on her long enough for us to feel kinship or stakes for her. I had no real sense after two hours of Jones’s character, of how she thinks or behaves, and that’s a real bummer.

And this pattern gets repeated all throughout the movie. The cast really is stellar and do absolutely everything they can to make it work, but between the cinematography, editing, and script, they’re left with so little. It’s a shame, because there are some actors I really enjoy in this, like Alan Tudyk as a droid (by far the most realized character in the film) and Riz Ahmed as a cargo pilot. And considering the terminal nature of the movie, we’ll never see these characters again, so this is all we’ll ever get.

There are a whole slew of other problems with the movie, from the eerie “Uncanny Valley” CGI monstrosities filling in for actors who have gotten old or died, to the unnecessary bits of fan service (which I’d argue are a disservice). Still, I’d rather my niece be watching garbage like this than garbage like those Transformers movies. At least Rogue One was about doing the right thing, standing up to institutional evil, and resisting even at great personal cost. It seems fitting, in this awful year with little hope on the horizon, that the rebels are the good guys again. We need it. I just wish they’d made a better movie, because I wouldn’t recommend anyone actively seek this out to watch.

The new Nine Inch Nails record, on the other hand, is somewhat more successful. Not the Actual Events is a five-song EP that abandons some of the cleaner, tighter sounds of Terry Razor’s previous effort, Hesitation Marks, in favour of fuzz and smudgy bass. I don’t know what this record is “about”, and I’m not prepared to read the promo materials that were shipped to real paid reviewers. But here’s what I hear: messy simple ideas jammed out, swirling noise and big drums, anxiety, dread, and a robot voice proclaiming, “Yes, everyone seems to be asleep.” This could be about ol’ Terry’s love life or whatever, but to me it sounds like a rational response to the next four years of Trump’s word salad and utter disregard for reality or the evidence that grounds us in it.

There’s something sad and funny about this record being created by a man who runs the music program for mega-corporation Apple. It was more palatable to hear Trent Reznor screaming about “this broken machine” when he was on the outside rather than the inside of it. Even still, I am sold on his dread. By NIN standards, this is rough and unpolished work, and that is enough to unnerve me. Then there’s the fact that the EP mostly avoids that low/mid-tempo rut that he has fallen into since the 2000s started. And while it’s mixed better than most noisy records, with all the dirty layers having their own space, it still feels like being trapped in a room with the panic in your guts as your only company. He’s still singing lyrics, and thereby it’s still occasionally as corny as any other vocal work he’s made in years, but there’s something fresh about this. Freshly angry. Freshly experimental. Freshly ready to stir shit up. And so I also enjoy this little EP as a promise of future subversive works to come.

I wonder if this is the Nine Inch Nails version of a Christmas album. The timing, when many of us are stressed (financially, emotionally, otherwise) instead of relaxing, couldn’t be better. I’ve been turning this up while cooking dinner each night to drown out my neighbours playing Christmas songs off the radio. It’s comforting for me.

Altogether, I have to wonder what 2017 is going to look like. If these, and Arrival and Inside and Watch Dogs 2 (which actually predicted the hacking/election woes of November to some extent), are any indication, it will be bad in an unprecedented way. I almost want to get in touch with artists I admire and ask them about the works they’ll be releasing in the year to come, so that I have an idea of what to expect for society. At least, in these times of treasonous demagogue presidents who don’t believe in science, we have artists making works that reflect our current anxieties, even if the work itself is occasionally shitty. It’s a small consolation, but I’ll take it.