Jay: It’s Friday; I’m in love. Welcome back to the end of the week, friends! Whether you’re in the west, where the air is choked with forest-fire smog, or eastward, where people are biting dogs on the subway, at least we’ve survived the new (old) threat of nuclear war between two bozos with awful haircuts. It’s amazing that we’re living in a time when Robert Smith’s iconic hairdo looks better than the so-called leader of the free world.

So, fellas, what have you been doing with your (end of) days? 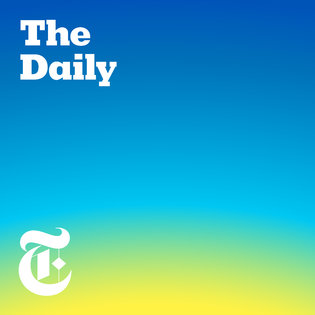 Mark: Well, speaking of the current collision course of two adult children who hold the reins of two nuclear-enabled nations, I can’t look away. So much so that I listen to the New York Times’ podcast The Daily, well… daily. The show is bite-sized at around 20 minutes per episode, and it is generally supplemental to one or two large stories that the print newspaper may be running each day. It stands on its own, however, asking the right questions and providing the right amount of insight to aid in grappling with current events as they unfold. It has, of course, been all Trump all the time recently, but that is presumably why I can’t stop listening. When the world ends, I’ll be very informed about it.

To distract myself from all of this, I’ve got a number of television shows on the go. Most of them fall on Sunday, so the first half of my week is largely taken up by catching up on just that one night of television. We could talk all we want about all of the crazy shit happening over on Game of Thrones, but I’d rather talk about how great it is to have Rick and Morty back. After a long hiatus, the new episodes don’t disappoint. It is as hilarious, acid-laced, and bleakly touching as it has ever been. I’m also watching the final season of The Strain, which is a terrible show, but I have given up on The Mist, because… there’s only so much punishment a person can take.

While we’re on the topic of punishingly bad television, the final episode of Orphan Black airs this weekend and not a moment too soon, because this season has been abysmal. Glad to see this show put out of its misery and tossed out of my life.

Josh: Speaking of all that crazy we’re all already watching on Game of Thrones, this great clip from Late Night with Seth Meyers is a solid companion piece. Leslie Jones’ live tweeting of Captain America: Civil War was a hit, and watching her watch Game of Thrones is a lot of fun in that way that sometimes you get joy just from other people’s excitement. Her observations on the show, from losing her mind at the Stark sisters reunion to calling Bron the “gangster who knows where to find the one dollar cigarettes,” are endlessly entertaining, because she’s genuinely enjoying it all. Watch doe-eyed Seth Meyers shrink next to Jones’ energy. “G.O.T. don’t let you down, son!”

I checked out the sequel to John Wick, and it is highly enjoyable! John Wick: Chapter 2 has more great gunfights, more Keanu, and basically everything you loved (or didn’t, what do I care) about the first film. The best thing about the John Wick films is the surreal criminal underworld its characters inhabit, where they live by their own set of rules, with their own language, economy, and code of honor. It’s highly enjoyable to just hang out in this weird world, where contracts are signed with bloody fingerprints and the weapons dealer is “The Sommelier,” even as the film’s treatment of violence is one that treats it abstractly as an art form but personally as a consuming horror. Bonus, the puppy lives through this one!

I like Jesse Brown quite a lot as a media critic, but less so as a personality. In The Canadaland Guide to Canada, Brown’s attempt to create Canada’s version of Jon Stewart’s America (the Book), he’s never as clever or funny as it seems like he thinks he is. There are certainly sporadic laughs in it, like the photo of an oil company CEO overseeing the oil sands that is actually just a photo of the Eye of Sauron overlooking Mordor from The Lord of the Rings, or the section ranking the “fuckability” of Canadian Prime Minsters. We’re a country that enjoys making fun of ourselves, but Brown’s treatment of Canada is so glib and often the jokes are so lazy and flat, that the entire thing too often feels like a disinterested shrug. If you want a book about how Canada is dumb on the whole and no one should care about it, maybe this is your book, but it rarely seriously skewers the country’s flaws in a genuinely funny way. I’ve read The Beaverton, I’ve laughed at The Beaverton, and you, Jesse, are no Beaverton.

Jay: Looks like it’s a TV week. I don’t tend to spend much time watching series, but when I found out Wet Hot American Summer had a new limited run (entitled Ten Years Later), I couldn’t help myself. It baffles me how a critical and commercial failure like the original movie has spawned not one, but two limited TV series, especially when its brand of humour is so goddam dumb and often deliberately corny. But if you’re willing to let yourself inhabit their world, and hang out with their astounding cast (many of which went on to to very successful careers, and yet still keep coming back for this nonsense), hanging out at Camp Firewood is a lot of fun.

And that’ll wrap up this week at the Fraudsters Almanac. Here’s hoping we’re all here (and radiation-free) come Monday!