Nine Inch Nails’ third LP, The Fragile, was released on September 21, 1999. The album peaked at number 1 on the Billboard 100 chart on its week of release and was certified double-platinum only months later in January of 2000.

Over the course of five years, people can really change. Teenagers especially. In saying this, I’m talking both about myself during the mid-to-late 90s, and also of our buddy Troy Rainstick, perpetual angsty-teen and Nine Inch Nails super star.

The great Lost Highway OST work aside, Nine Inch Nails took a good looooong break following the success of The Downward Spiral, and did not reemerge with a new album until 1999’s The Fragile. By this time, Nine Inch Nails were one of the biggest acts in rock music, and expectations were high. Trentwell Ruzzelstein reacted as any rock star would: He decided to release a double album.

Double albums are tricky business. Actually, let me rephrase that. Double albums are not at all tricky business, because they are universally a bad idea and no band has ever released a double album that couldn’t have just been one regular LP. So it’s actually very simple. The format lends itself to inevitable and pointless bloat that winds up just seeming indulgent and self-important and dilutes the potency of the good work that may be present. Who has that kind of attention span?

Certainly not me when I was 17, that’s not who!

I was a Nine Inch Nails fan, as we covered last time, and I remember looking forward to this album despite not being thrilled by the singles. I believe that I listened to it all of … one time? And then hadn’t really heard it since. By the late 1990s, I was still a teenage boy, but I was even more ruled by a need for immediacy from the media that I consumed. This was a period where I was getting more interested in (shamefully) the “metal” musicians of the time, and The Fragile felt plodding and pointless to me at the time.

I’m older now, and have a lot more patience. Let’s dive in and see if I was wrong about this collection.

Note: As I’ve noted, this is a double album, and as such is very long. In order to make this review manageable, I’m going to split my review of The Fragile over two posts. This post will cover disc one.

Somewhat Damaged
The sounds at work on this lead-off track are creepy and fascinating. It sounds like a lurching and inevitable disaster feels, which is to say it sounds pretty great for a mood-setting Nine Inch Nails track. It sounds even more heavily layered than The Downward Spiral, although it uses a similar bag of tricks. The chugging guitars and industrial noise sound just as vital as ever.

Lyrically, I feel like Turkey Razor is pumping a dry well, but the “too fucked up to care anymore” refrain is effective and … hooky? This is no “Mr. Self-Destruct”, but it’s a good and spooky way to open an album.

The Day The World Went Away
While this song sounds terrific (the atmospherics and beyond fuzzed-out guitar are incredible) the structure of the song and its content leave it feeling more like a sketch or an idea of a song than a completely fleshed-out piece. I do enjoy the way that this song moves from feeling like a dirge to feeling like the world’s most broken campfire sing-a-long, though. This is a fine album track and may work within the context of this (very long) collection, but I would not consider it a standout.

The Frail
Although I may have just griped about a track being more of a sketch than a song, this short piano-focused instrumental is gorgeous and transfixing in the same way that “A Warm Place” was on The Downward Spiral. So far, I am truly enjoying this album sonically and love the instrumental work, but I haven’t heard any traditionally “pop-based” structure that has grabbed ahold of me.

The Wretched
“The Frail” bleeds seamlessly into “The Wretched”, which has a boiler-plate Nine Inch Nails vibe right off the top. Again, the instrumental work is strong and there are some compelling sounds swirling around here. Vocally, it primarily just sounds like Treznards shouting wildly into a pillow or something. The reprise of the chorus section with a noise-guitar solo over top of it is actually far more interesting than the proper vocal chorus, which says something about how disappointing this song is in that arena.

We’re In This Together
This is the first track on The Fragile so far that I would consider as having strong vocals hooks, but they really work on the chorus and less so on the verses. The line-reading of “I’ve become…. Im-pos-i-bulll” is kind of laughable. The chorus is huge and anthemic in a way that this album has been laughing, and I think it sounds great.

This track is also ahead of the curve in terms of the strange elemental bit-crushing effects that it employs. It’s unsurprising that Reznor would be a pioneer of this kind of sound, I suppose. Sounds great.

This song is great. I like it a lot more now than I did at the time.

The Fragile
I’m not sure that stripping things back and making these lyrics and this vocal performance the front-and-centre element of this song was a great idea. The verses are cringe-worthy. The chorus, while still kind of trite, has a memorable enough sing-along feel that elevates the whole affair, but again we have a guitar solo section that generates more interest than the proper chorus.

I will say that the arrangement in the bridge section is very strange and interesting, but I wouldn’t call it enough to make this song click.

Just Like You Imagined
Is it bad that midway through this song, I was enjoying the instrumental work enough that I started to think “Oh man, don’t ruin this by starting to sing over it, Terry”. And luckily, he doesn’t! This is a terrific, warped, shambling instrumental. Too many great sounds to begin talking about. It’s like being on the run from a bunch of robot military wasps. Five stars.

Even Deeper
Another fairly uninspired vocal-based number. The chorus is truly unremarkable. Still some great elements, though. The sampled, ghostly violins are fantastic. I don’t know if I’ve made it clear, but the production work on this album is largely wonderful. The quality of the recording, like most Nine Inch Nails’ work that I’ve heard, is head and shoulders above the sound of most of the albums released at the same time. It’s a shame that this song isn’t better.

Pilgrimage
This isn’t quite as compelling as the other instrumental numbers so far, but it does kind of climax into a Godzilla-clowns-from-hell vibe that makes it more interesting than most of the vocal joints the The Fragile has to offer.

No, You Don’t
On previous NIN work, Trentzsnore managed to pull out vocal performances that sounded both menacing and vulnerable, most notably on The Downward Spiral. On The Fragile, it seems as through he is chasing both of those effects and completely missing the mark. His faux tough-guy snarl on “No, You Don’t” is the nadir (thus far) of Reznor searching to menace and winding up sounding cartoon-y and goofy. It would be funny if it wasn’t so… embarrassing?

Great fuzz effect in the closing minutes of the track, but it doesn’t nearly save the song.

La Mer
The instrumentals on this album are far, far more compelling than the “proper” songs. Where on previous albums they seemed to be very effective as exercises in building tension (or defusing it), on this album the instrumentals seem to be the main event. “La Mer” keeps with this trend by presenting a dizzying array of syncopated parts that work toward a mesmerizing whole. This is a pretty cool track. More piano more of the time, please.

The Great Below
The first disc of The Fragile closes off with a rare moment of success in the realm of vocal-based tracks on this album. “The Great Below” is a cut above many of the other tracks on this album so far. It’s got a dismal vibe, but in the best way and the mostly sincere-sounding vocal work actually help the song rather than hindering it. The “deep void of sorrow” vibe that permeated some of the best songs on “The Downward Spiral” is all over the place here, but the mood never becomes so suffocating that it tips over into the bathetic.

Also, when the stereo-swirling drums kick in midway through the song? Hoo-boy, that’s some good stuff. This isn’t an ending track on the level of “Hurt”, but it’s technically not the end of the album, so that can’t be held against it.

The late-90s see our hero shedding some hair and also some sleeves. I’m not convinced by this semi-bowl cut that he’s got going on, but given that he was apparently having many issues with addiction around this time, I’m happy to see that he seems to at least keep himself in reasonable shape. Nice guns. 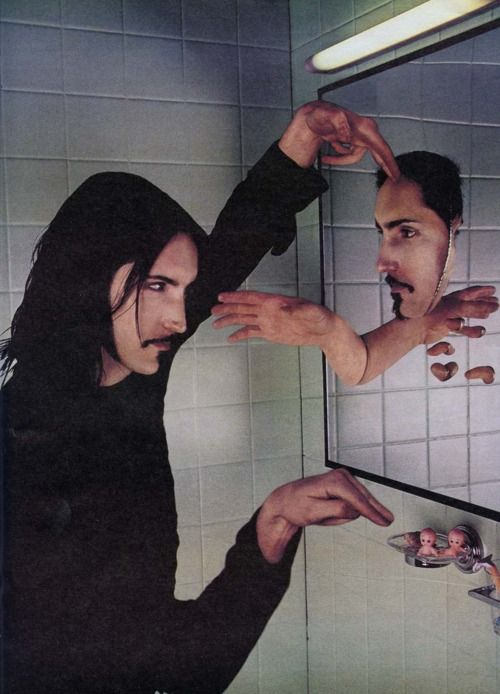 It is worth mentioning that a few years prior to the bowl-cut, Trent finally went full sex vampire. It was both the best of times and the worst of times.

I can totally see why a younger iteration of myself thought that this album was lame and boring. I came to Nine Inch Nails for the smartly written digital rage, and this album seems less intent on doing that kind of thing and more intent on instrumental curiosities and sound-crafting experiments. The three minute jolts of furious angst that defined the best work on Broken and The Downward Spiral are slowed and drawn out here, with most of the tracks clocking in at more than five minutes. As a teen, I would not have tolerated this.

As an adult, I’m more of the mind that – while the overall songcraft isn’t as timeless as that of the earlier NIN work – the album is (so far) a sprawling and impressive piece of work with no shortage of things to like about it. As I’ve mentioned repeatedly, the instrumental tracks on this album are superb and I will return to them.

Just one disc in, though, and the Double-Album effect is rearing its ugly head. I can already feel the bloat and I have to wonder if the second disc will seem unnecessary and weak. Perhaps, though, the second disc will correct some of the weak spots present on disc one and it will all work well in context.

We’ll find out next tiiiiiiiiiiime…