The Broken EP is NINE INCH NAILS’ major label debut, and was released on September 22, 1992. It peaked at number seven on the US Billboard 200 chart and has been certified Platinum in both the United States and Canada.

When I was a teenager, I used to give an album a great deal of extra credit if it came in some kind of strange or elaborate packaging. The wackier the better. Did you release your album with a bunch of fake blood in the jewel case that sloshes around when you move it? I probably thought that you were cool.

I owned a copy of Broken on CD in the mid-90s, and it was packaged in a nifty gate-fold “digipak” that was super cool the first few times you open it and then super annoying every time after that. I recall that “digipak editions” were very popular throughout the 90s, usually containing bonus tracks & digital content not available on other releases. This bonus content was perhaps to help people overlook the fact that the cool fold-out packs were all flimsy cardboard that seemed impossible not to ruin.

I did a lot of listening to Broken as a kid. I loved it. It was scary and extreme to me at the time, and contained that hint of counter-Christian content that sent a thrill up the leg of a good Catholic schoolboy.

How well does Broken hold up, twenty-five years later?

Pinion
Broken opens with less a song than an instrumental sketch of scary audio pieces. I doubt many people would listen to it on its own, but as an introduction to the rest of the pieces on the album, it sets the mood nicely. And check out this fucking terrifying video! I’ve never seen this, and it rules!

While Pretty Hate Machine leaned heavily on a dark synth-pop sound, “Wish” establishes a new order of things immediately. The pounding beat and gurgling, snarling guitars are far more aggressive than anything off of Nine Inch Nails’ debut, as are the vocals. The chorus still sounds huge to me and I’ve heard this song hundreds of times. The outro succeeds wildly in executing the classic Terry Razor trick of continually trying to out-do himself by piling on layer upon layer of noise.

This song still kills me and I love it very much.

Again, the guitars are huge. There is a mountain of guitar on this song and it is all razor sharp. Terry Razor sharp. The accelerated pre-chorus followed by the hooky and mesmerizing chorus section works perfectly. Reznor’s vocal performance on this track is terrifically unhinged. Guy sounds pretty mad!

Help Me I Am In Hell
This song still smokes.

Although this track is just a droning and swelling repetition of the same (very cool) guitar figure, it is a great tension-builder and suits the album perfectly in context. I remember seeing Hellraiser in my late teens and realizing that it was the inspiration for this song title and feeling very proud of myself for understanding such important intertextual details.

Also: Again, look at this fucking video! This is insane! I haven’t seen this, but it is so crazy!

Happiness in Slavery
When I was a teenager, I found this song to be especially scary. He yells so much and I’m not sure that I was ready to appreciate the whole “wake up, sheeple!” messaging behind the whole thing. So I listened to this one less.

It holds up pretty well! I love the distorted bass and the stereo-panned chugging guitars. I think the song may be a little on the long side, owing mostly to the clattering industrial bridge. It’s still pretty great, though. This is another example of Troy Raisin just taking his vocals on a trip off the deep end. Boy, he sounds unhinged. Which is good!

This is not a favourite of mine, but it works well as a part of the whole and is still pretty scary! Even now that I’m 35!

Gave Up
This song still smokes.

It’s like they listened to the drum beat from “Wish” and said “What we need is this but much, much faster”. They were right! This is where the industrial clank-factory meets mosh-pit punk, and it rules. It has a great balance of catchy hooks and aggro-rock elements and serves as the perfect capper for this, the official six-song set of Broken. The way that the song disintegrates into a mutated heap of noise is still fascinating to me.

Speaking of videos I’ve never seen, check out this performance video of this song with Marilyn Manson on it! It’s actually really great!

The Broken CD had 99 tracks on it. In the early 90s, most bands thought that it was really fun and artistic to play with the new digital form in some way. Most of them just put many minutes of silence on the last track of their album and then included a “secret song” at the very end of the album. It was annoying to have to seek through the final track in order to hear this final number, but sometimes the hidden track wouldn’t be worth hearing more than once anyway.

Nine Inch Nails decided to eschew this particular trend by throwing something like 91 one-second tracks of silence after track 6. So if you were listening to this album on a discman, you would have to manually skip all of them in order to hear the two hidden songs (or just wait the 90 seconds). This also made it impossible to ever listen to this album on random. I suppose this is fine, as the run of six songs that make up the proper EP work so well in sequence. But still. Fuck you, Trenp Rugtar.

Physical
This is an Adam And The Ants cover and it has always been underwhelming to me. I think that the chugging rhythm is supposed to be sexy/creepy in that way that Traxl Rose always loved to present himself. It isn’t awful and I think it would be fun to see them play it live, but this track still doesn’t stand up to the rest of the album.

Suck
I’ve always liked “Suck” more than “Physical”, but I still consider it to be a more mediocre take on the sound showcased on Broken‘s better tracks. The chorus is nice and big, but the song as a whole sounds somewhat half-baked to me. I could have done without it, but on a full-length album, this could have been easily hidden on the back half and I wouldn’t have been to hard on it.

Appropriate to the aggressive and nihilistic turn that the music had taken, the early 90s saw Trenny Rez taking the time to really learn to brood. Brooding in the garden! 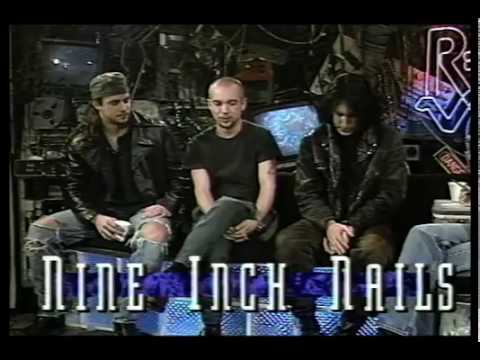 We see lots of black on our boy during this period and I wonder why he was so glum! I hope that he is feeling better!

The proper EP (from “Pinion” to “Gave Up”) is as flawless a run of music as any musician in the early alt-rock explosion managed to create. It still sounds huge and is pumped full of innovative production work that still leaves me feeling awed and puzzled to this day.

And mad. Boy, this is angry music. It really tickles the ol’ angst ivories something fierce.

While I don’t believe that the two hidden tracks are essential, I find it hard to make a case against Broken being one of the most interesting and vital hard rock albums of the early 90s.

Given my obvious affection for this album, I’m sure that you’ll know what to expect next time when I cover The Downward Spiral, but you’ll have to wait until then to be sure.

Pigs we get what pigs deserve, everybody!