If you live in Toronto, there’s one weekend of the year that’s a clear winner for being the most divisive weekend of the year.  Nothing says “let’s get the fuck out of here and enjoy the last weekend of summer” than four days of your West End apartment rattling off its foundation because some people from the suburbs like to watch planes fly in circles. So I took to the open road to get away from the noise and go somewhere the total opposite of the city—an off-grid cabin in Prince Edward County.

This wasn’t my first experience with Ontario’s Cottage Country, or even my first experience with what the kids these days are calling “glamping” (a portmanteau of “glamour” and “camping”). But it was my most extended version of said activity, testing the will of someone with a general distaste for bugs and heat and a notoriously short fuse for the outdoors in general.

Is the allure of escaping the air show enough for even me to appreciate the change of pace that comes with a simpler life of isolation, minimalism, and semi-roughing it?

We arrived after a near three-hour drive to our destination. Tucked away behind a series of crudely hand-drawn “No Tresspassing” signs and padlocked chain barricades, the place felt unwelcoming, at least to those who had not been welcomed. My wife had booked this whole thing, and while I trust her competence, the first few moments felt distinctly like walking into a place one might go to die, if not from murderous hillbillies then from the uncaring elements. The small one-room cabin, decorated with the skins and antlers of dead animals, seemed to hint at the probable fate of those who could not contend with the forces of nature. And as we’ve established, I am not on the best terms with nature.

As we got settled in, I was gripped by anxiety about spending 70 hours in a place with off-grid power and no WiFi. The place was equipped with solar power to run the lights, but anything bigger (like the hot plate and coffee maker) required walking out into the woods to run a gas generator, then running back into the woods to turn it off. As I read through the proprietor’s lengthy list of instructions and rules regarding the property, I just wanted to know if I could run my laptop and charge my phone. My phone would charge fine, it turns out, with a small power pack that was included for such purposes. My laptop on the other hand, I conserved until the last morning, when a tethered WiFi connection from my phone and a poor TIFF ticketing system left me empty handed and wishing i had just killed the battery playing Steam.

Within the first few hours of being there and exploring the property, the dog got lost in the woods and fell in the pond, after which he spent the next five minutes sputtering and coughing. Probably had leeches, for all I know. I do know he smelled terrible and I had to give him a makeshift sponge bath using baby wipes. This city dog was out of his element. You and me both, I thought.

It wasn’t long before I was gripped by a sneezing fit. God knows how long the furniture in this place had been there, or how long since the place had been properly cleaned. “Are you allergic to nature?” my wife asked, jokingly. But to be fair, I’m allergic to everything. While she sunbathed I spent the next several hours clinging to the vestiges of city life by taking a nap in the cabin’s admittedly posh and comfortable bed.

Friday evening we thought it might be fun to take the canoe out on the pond as a couple’s activity—the dog was wise enough to not go near that death trap, so he stayed ashore. But the venture turned solo when we couldn’t even leave the shore without nearly capsizing. That was enough for my wife to lose interest, but I would not be deterred. I’m a straight white male, and therefore unable to call it quits even when all signs point to something being a terrible idea. I’ve been compared to a canoe-related viral video before; I’ll not have it happen again.

So I set out alone.

Being on the water felt freeing, like a last step away from the familiar, the busy. But as I paddled circles around the pond, disturbing ecosystems with every stroke, I wondered whether humans even belong in nature. We’ve colonized the wild to build cities to segregate ourselves from the outside world. Is it fair to ask for that world back, even temporarily? Everything in this pond is better off without me here. It seems a selfish pursuit, going “back to nature” for the weekend,  leaving our stamp of boot prints and pollution, noise and otherwise. Humanity is a cancer.

Nothing tests your primal will than attempting to build a fire. Yeah, we use newspaper and lighters instead of rubbing two sticks together, but there’s still a rad sense of accomplishment that comes from seeing those flames go up and stay lit. Like following a map, cooking, or sewing a button, it’s pure, and simple, a series of steps that, if followed, reliably results in a comforting and controlled fire.

It’s curious how quickly you shed the trappings of civilization, being comfortable in dirt, sweat, and a punishing sun. Building a fire connects one to our most primal instincts, the pure connection to the elements that our ancestors relied on to survive. Looking up at the stars in a black sky where the brightest light comes from the moon, you’re reminded of how purifying it can be to exist in a space where you’re free from the expectations and responsibilities of modern life, even for a time. The distractions of city noise give way to the din of millions of winged creatures, deafening in their own way. It’s a beautiful world; we’re just living in it. We’re destructive by nature, but we’re also creative. We can try to leave a small footprint, to be responsible and live sustainably. And if we’re here, maybe humanity needs these experiences to remind us of what we’re in desperate need of saving. 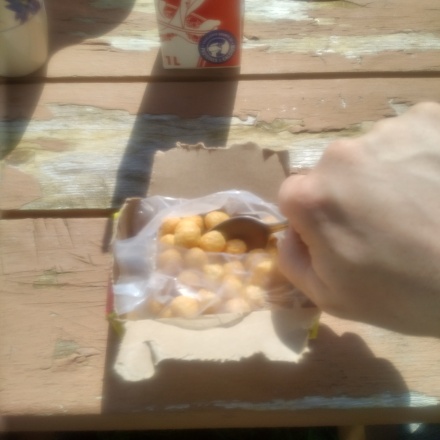 Glamping is—in theory, at least—the best of both worlds. You get to spend time outdoors drinking beers and making smores, but without the hassle of setting up a tent and the limits of not having access to running water that come with true camping. There’s no Chris McCandless bullshit to be had here. You want a hot shower, you run the water heater for ten minutes. You run out of food, you drive into town. We had no need for hunting or trapping despite the taunting of the cabin’s decor. Even when relying on an unpowered cooler full of ice to keep your food cold, it’s possible to cook great meals when you have access to lots of prep space and several heating elements. Bacon and eggs and those adorable tiny cereal boxes are a camp breakfast staple, but dinners included flame-grilled sausages and corn on the cob, and pasta with fresh cheese and basil in a fresh roasted tomato & red pepper sauce. Bon appetit!

By the end of the second day the rustic lustre had begun to wear off. There’s only so long you can use an outhouse before the sight of other people’s poop begins to feel like a mocking nightmare. The bed had revealed itself to be far less glamorous than it had first appeared, and was now an uncomfortable, sunken series of lumps inducing neck and back pain. Allergens plagued my sinuses so badly I required two Reactine just to fall asleep. I awoke Sunday ready to head back to the comfort of my Endy and WiFi. But I still had a full 24 hours there. After a delicious breakfast of black coffee and a grilled cheese and apple sandwich, my good mood had returned, and I was ready to face the day.

One of the great things about getting away from the city is that you can explore parts of the country you’ve never seen before. There’s no shortage of charming small towns and beautiful country roads throughout Ontario. We spent the day in Campbellford visiting their provincial park, waterfalls, and giant toonie monument. If you happen to find yourself in Campbellford, visit Capers Tap House, a 20-year-old establishment housed in a much older house, which is currently the #2 top rated restuarant in town, according to TripAdvisor. The food is excellent and the beer selection is quite good. I downed a Barley Days Wind & Sail dark ale, so let’s have an impromptu beer review:

The colour: It was very dark.
The can: I don’t know, it came in a glass.
The flavour: Nice. Robust hops and caramel/chocolate & malt flavours.
The verdict: Have one. It was very satisfying.

The last evening we enjoyed in our pond-side abode was a beautiful one despite a rainy day. I managed to get a fire going even with wet wood, and it sustained us through an evening sunset that was the stuff of travel-brochure imagery. By the end, I had enjoyed the trip as a whole, while at the same time feeling like glamping prevents you from full immersion in a lifestyle of survival. If what you’re looking for is a chance to test your true Susanna Moodie-like mettle and face off against nature’s harsh indifference, then glamping is not for you. Go fully off-grid or not at all: no half measures. If what you really want is to go camping without the hassle and dank discomfort of a tent and and air mattress, then you could do worse than a trip like this.

I arrived back home in Toronto on Labour Day, having enjoyed the quiet down time and the perspective that comes from spending time in a more slow-paced, secluded environment, from the simple joy of watching a small dog chase snakes and frogs. It was a good weekend, despite my body covered in mosquito bites more than a week later telling me the opposite.

Then again, I also arrived home to war planes still flying over my fucking house. So what was even the point of any of this?