I have always loved horror anthology films and television series. Bite-sized servings of feel-bad dread or cackle-out-loud b-grade fright fare have been high on my list of favourite media ever since I was a much-too-young kid sneaking episodes of Tales From The Crypt at any given opportunity.

When Black Mirror came along a number of years ago in its original BBC run, it seemed like an extremely smart, fresh and relevant take on both the horror anthology genre and on modern satire. While social media, smart phones and bleeding edge technology weren’t exactly brand new issues at the time, it did seem as though the earliest seasons of Black Mirror provided some perspective on where things could possibly be headed that was suitably terrifying and thought provoking.

Now, a number of years later, reality seems to be just as terrible as anything the show can throw at us and it appears that their well of true insight has run dry. The newest season contains even less food for thought than the previous made-for-Netflix set of episodes, which had already felt largely like shallow retreads of old ideas.

What we’re left with is an anthology series that plays out like The Outer Limits for the iPhone generation, a handful of different stabs at short genre film making that is often very entertaining but ultimately winds up being the empty popcorn fodder from the ol’ content farm that the show would have felt the duty to completely skewer back when it was young and still sported its original set of teeth.

Here’s how the season rounds out. WARNING: There will be spoilers included for the rest of this post. 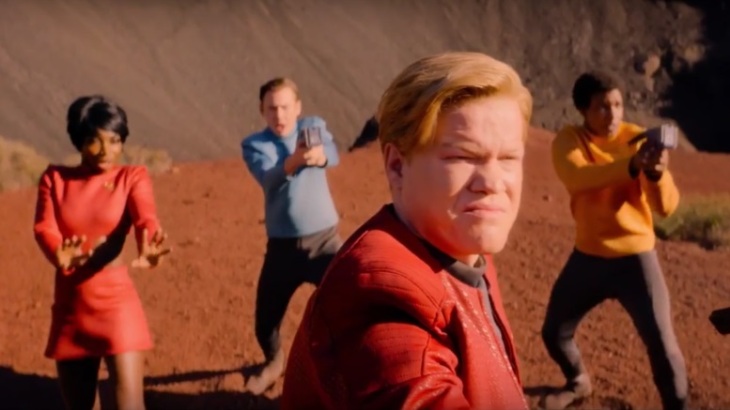 U.S.S. Callister
Season 4 opens up with “U.S.S. Callister”, a riff on classic Star Trek tropes and toxic tech-guy slimeballhood, and it is generally a whole lot of fun. They’ve assembled a terrific cast for this episode, that includes Cristin Milioti, one of the McPoyles and even Meth Damon! The jokes fly fast and furious, the production design is spot-on and Meth Damon seems suitably threatening and pathetic in equal measure. I had a very good time watching this episode.

That said, I’m not exactly sure of what this episode was trying to say. Are they saying that inside every outwardly weak male lies fantasies of violent control? Is this a statement about the seedy misogynist underbelly of the tech industry? Are we meant to ponder whether or not digital copies of people’s identities are beings entitled to autonomy and rights?

I feel as though they’ve tackled the latter question previously and perhaps with more insight, but never in such a colourful and fun manner. The stuff about the character being a closeted vindictive piece of shit doesn’t really land for me as a new topic to be covered, but works well enough for the purposes of a tight little one-off tale of comeuppance. 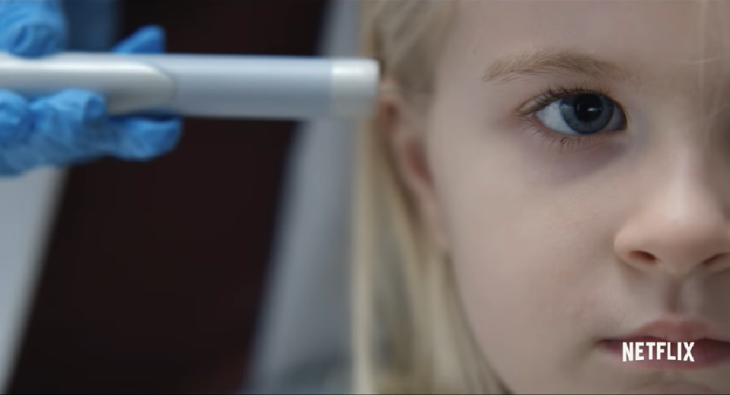 Arkangel
This series has already gotten loads of mileage out of speculative fiction which posits that future technologies will allow for the transmission of images from somebody’s eyeball to computer screens and televisions. “Arkangel” introduces a new wrinkle to that subset of Black Mirror episodes. It isn’t saying “Here is a new thing we thought of!” so much as it is saying “We thought of a new bad thing that could happen with this thing we already thought of”.

The episode follows the story of a mother and her choice to implant her daughter with what amounts to an implanted tracking and monitoring device, to the degree that the mother can use her iPad to tune into a feed straight from her daughter’s eyeballs. I immediately assumed that eventually this poor girl’s mom was going to watch her get involved in some standard teenage sexual experimentation, and my assumptions about how things would pan out were essentially all dead on.

Although the episode is very predictable in a dramatic sense, I actually see this Black Mirror device as one of the most plausible things that they’ve ever come up with. Visual feed excepted, a device that tracks a child’s location and vital signs is absolutely the kind of thing that today’s helicopter parents would drop loads of money on. Not a great episode, but I can see this kind of thing happening. So it gets points in that regard.

Crocodile
In the chilling future “Crocodile” puts forward, insurance companies can hassle absolutely anyone and spend ludicrous amounts of money investigating routine accident claims. They can even take what looks like a laptop from 1993, plug it into your head and see your memories playing out on a shitty little screen. The horror!

“Crocodile” is an hour of television in which every character’s reaction to every situation makes exactly no sense. People make baffling choices solely to dig themselves deeper into whatever it is they’ve gotten involved with, and this series of escalations feels completely exasperating. I get the impression that the episode’s creators were trying to tap into a feeling of madcap “oh shit!” noose-tightening. They fail.

By the end of the episode, when the protagonist has done things that are unthinkable – and I mean unthinkable to any reasonable screenwriter, because no character would ever plausibly take it so far – and we’re expected to believe that they’re going to dig memories out of a guinea pig to prove a baby-murder… I was ready to cancel my Netflix subscription.

The plotting is terrible, the proposed technology is laughable, and I hated this one.

Black Mirror has tackled twue wuv before, most potently in Season 3’s excellent “San Junipero”. Surprisingly, though, it has taken them this long in order to get around to the already terrifying dystopia that is online dating in a digital world. As bizarre and terrifying as things get in “Hang The DJ”, it never really winds up seeming truly any worse than what I’ve heard from people who have used Tinder in the real world, so…

What we’re treated to here is a fairly charming and funny story about a man and a woman who should obviously be together, and who we feel fine about rooting for being together, while they are kept apart in an obvious bit of lesson-learning and character building (and wuv intensifying). The inclusion of an online dating system that allows people to know the expiration date of their relationship and how it translates to the protagonists having tedious one-night stands and year-long relationships filled with resentment is a smart and funny way of alluding to the real world ways in which people struggle to find who they should wind up with.

There are some logical leaps as the characters piece things together, and I wasn’t super thrilled at the “it was all a simulation!!!” conclusion, but I had a very good time watching this episode and I was happy to see a happy ending. In more ways than one, amiright??? 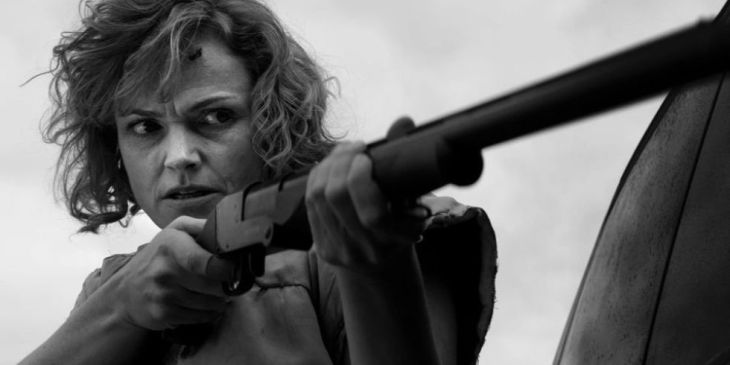 Metalhead
Imagine my disappointment that this episode wasn’t about the future of listening to heavy metal.

“Metalhead” stands apart from the other episodes of this series in that it is essentially just a piece of science fiction/horror fiction that unfolds over a period of 45 minutes of unbroken suspense. A classic Terminator-style tale of being stalked by an unstoppable automaton.

As a series of action set pieces, “Metalhead” works fairly well. The pacing is relentless and the threat seems palpable. As a good Black Mirror episode, I am less convinced. The episode has virtually nothing to say, instead presenting what seems to be a fairly run-of-the-mill post-apocalyptic future scenario. What are we to make of the ridiculous button to the episode, in which we find out that our heroes were after a teddy bear? Are we to believe that this vision of the future is so grim that three people losing their lives is a reasonable sacrifice to make for a teddy bear? Really, it just feels as though they were attempting to tack on a twist ending to make the whole thing feel more tragic and insightful. Not so fast, Black Mirror. You didn’t earn it.

All this being said, “Metalhead” is the episode that I would most have liked to see expanded into a feature, as I would have liked to have learned more about these “dog” robots and what exactly went down. The unanswered questions here don’t hang in a “food for thought” manner, but in such a way that I would have enjoyed it more if I had more context.

I enjoyed watching “Metalhead” well enough, but was left with an empty feeling by it.

Black Museum
Black Mirror is quite comfortably situated in the company of like-minded properties such as The Twilight Zone and The Outer Limits at this point. There was a time when I would have considered it to be something a little more groundbreaking and thoughtful, but it has been demonstrated over the last two seasons that the show seems more or less content to peddle short exercises in genre filmmaking that hew to a “scary technology” set of themes. And this is actually fine, as it is often very fun to watch, has very slick production values and great onscreen talent.

Never before has Black Mirror tilted so far in the direction of camp as it does in “Black Museum”, and I can’t for the life of me decide how I feel about it. An extra-long omnibus episode, “Black Museum” is essentially a series of tales of medical science gone wrong in the hands of a greedy marketing executive. The tales are nasty pieces of violence and suffering that don’t end well for anyone.

More so than any episode of Black Mirror before it, “Black Museum” has the melodramatic overacting and larger-than-life caricatures of HBO’s classic EC Comics adaptation, Tales from the Crypt. The characterization of the executive/museum owner in particular seems to have leapt directly from a 1990s Crypt episode and landed here in 2018, all moist and wildly gesticulating.

The three tales contained within don’t really carry much with them in the way of impact, all being three more takes on “oh no, scary technology” that weren’t deemed solid enough to warrant full episodes. And the wrap-around story is no better, the comeuppance that lay in store being so obvious that one is simply left to wonder how they will wind up punishing the guy.

The thing is, there’s a certain nasty glee to the proceedings, one that harkens back to the hoary old Crypt episodes or even HBO’s late-90s series The Hunger. This vibe makes the episode an entry into the Black Mirror universe so singular, it barely feels like an episode of Black Mirror at all.

Each subsequent season of Black Mirror carries with it a lessened impact. I have to wonder if it has to do with actual diminished quality, or with the possibility that all of the episodes are actually as good as the early ones, but we’re just less easily impressed. It certainly must be difficult to scare us all in the same way now that it would appear that the world is a massive dumpster fire anyway.

Black Mirror: Season 4 is easily my least favourite season of the show so far, but I still managed to find some enjoyment in it. The show has traditionally been about coming away feeling bad anyhow, so I imagine I’ll be on board for a Season 5 regardless of my expectation that it will slip further still.