Hyper Light Drifter is an isometric action-adventure game with challenging but fair combat, a rich world to explore for secrets, and an integral soundtrack. In other words, it is the sequel to The Legend of Zelda that you always wanted, and it is fucking superb.

It’s difficult to say much with certainty about the story of Hyper Light Drifter. The end of the world has come and gone, the remnants of giant mechanical corpses litter the countryside, and the world is populated by anthropomorphic animal-people and all manner of dangerous creatures and robots remain. You are a person (who I always called the Drifter in my head) who has a vision or dream or flashback and begins to wander that world, trying to make sense of the vision.

To the game’s credit, all of the narrative and world building, and virtually all information within the game, is conveyed without using text. The game establishes a visual “language” of sorts to train the player across the dozen or so hours of play. At first, this meant I was dazzled by the post-apocalyptic imagery and beautiful pixel-art vistas, but also absolutely perplexed by what specific information the game was trying to give to me. Early on there’s an image that, in retrospect, makes it clear what the goals are for the player; upon first seeing it, though, nothing about the image makes any sense. There are stores and shopkeepers but it’s unclear what they’re selling or how to buy it.

On the one hand, this can be frustrating, especially when coming across new information for which there is no context. On the other hand, it’s exhilarating to decode something for yourself, to start with an incoherent world and piece together a meaningful interpretation. If anything, I wish they’d followed through all the way, to completely deny any traditional video game tutorial text. I couldn’t tell you whether all my interpretations were correct, but at least they were internally consistent in my head. And that’s a great feeling.

But enough about their philosophical approach. Hyper Light Drifter drops you into the centre of a world and allows you to explore however you’d like. Essentially, you’ll collect shards in a given area and defeat that area’s boss before moving on. Each area is visually distinct and often has its own tribulations; one area, for example, has dangerous crystals that can impale you, while another area requires you to raise platforms out of the water. And there are so many secrets in this game, mainly in the form of a currency used to upgrade your gear. I only found about half of these secrets even though I was carefully looking.

There’s also the issue of fighting off monsters and robots. Hyper Light Drifter arms you with three basic abilities, each of which can be further developed and expanded. Your primary weapon is your sword, which attacks in three-hit combos. You can also use guns, which have limited ammo but are effective in dealing with bosses or large crowds. Finally, and arguably the most unique, you have a dash ability (a drift, maybe?) that can get you out of harm’s way or close enough to connect with your sword. This ability can also be upgraded so you can chain many dashes together, zooming around the screen like a bolt of lightning, which is often necessary because the game throws hordes of enemies at you all at once.

All this probably makes it sound like a hectic action game, but in practice it’s much more deliberate. Mashing on the buttons is a quick way to get yourself killed. Instead, the game rewards methodical actions, knowing when to strike and when to dodge, how to keep your distance and how to swoop back in for the kill. At first I was terrible at the combat, and I wanted to blame it on poor gameplay mechanics. But once I got the hang of it, I loved the slower rhythms. It scratches that same itch as Dark Souls for me, another game that rewards careful choices of actions, but is faster overall.

Also like Dark Souls, Hyper Light Drifter punishes you swiftly and mercilessly for careless actions, and often you’ll encounter challenges that seem impossible upon your first attempt. This is a difficult game at points. Thanks to a mostly good checkpoint system, though, you can keep coming back for more punishment, and since the game is fair, you’ll see improvements with each attempt. There are only a couple unfortunate moments where the checkpoints are too far back in time, or the enemy encounter seems a little unfair. 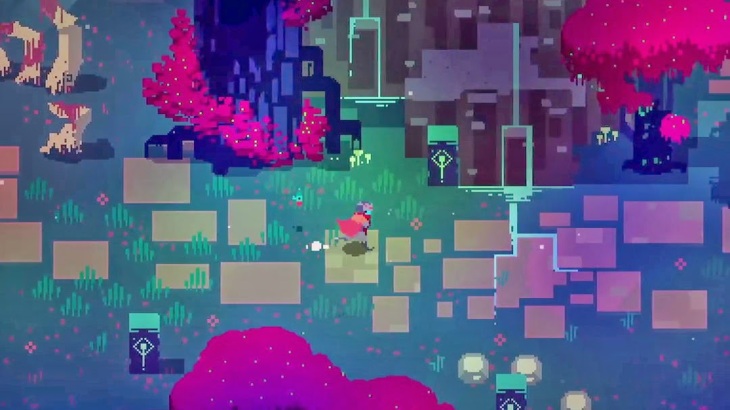 I would be remiss if I failed to mention this game’s presentation. Yes, I’m a thirty-something, so I have a soft spot for 8- and 16-bit art. But it’s more than just the pixelated aesthetics. The animations are gorgeous, the cutscenes are brilliantly composed, the colours are vibrant, and the character designs are unique and interesting. It’s a beautiful game with a tremendous sense of style. And then on top of that, they got Disasterpeace (aka Rich Vreeland) to put together hours of beautiful, haunting music, synthscapes that perfectly echo the loss and rebirth of Hyper Light Drifter‘s visual world. His music is a perfect match, and gorgeous in its own right (I may write a review of that record soon).

This game is pretty much the perfect size and shape for someone like me: a dozen hours of wandering distinct worlds with an embedded narrative, and moment-to-moment gameplay that is challenging but fair and fun. It’s interesting to consider it against Jotun, another game I recently reviewed here that shares some similar design choices. Hyper Light Drifter is simply a more successful version of this type of game: more fun to play, with fairer mechanics, and a more tantalizing game world that doesn’t spoonfeed the narrative to the player. And all designed by a very small team in a free software program! Incredible.

Hyper Light Drifter is $20 on Steam. You should really play this game.