I got an email last week from my illustrious colleague.

“Haha!” I thought. “Challenge accepted!” I said. I had also heard the single and truly, it is terrible. “I will make short work of this Weezer record,” I thought.

Well. I’ve listened to the record. And now I don’t know what to fucking think.

You ever see Altered States? Well, that’s what this review was like for me.

A little bit of background – I’m one of those. One of the folks who loved Weezer intensely during the 90s and still revere the self-titled debut and Pinkerton as two of the great alt-pop (or any pop) records of our times. I’m also one of the folks who – while elated at first in the early 2000s by Weezer’s return – have gone through all of the perfunctory phases (denial, bargaining, acceptance) in regard to how to receive Weezer’s more recent output. We put on a brave face. We say “Oh, yeah. That band I loved – total shit band. They make shit-records that sound shitty” and we laugh, quietly humming “Only In Dreams” while our lousy little 90s-kid hearts crumple.

Certainly ever since the abysmal Make Believe in 2005, every new Weezer release has been received with a combination of “oh… that sounds stupid” and “of course it sounds stupid – it’s the new Weezer record”, with things really bottoming out around 2009 with Raditude, and album that they actually named Raditude. That was the title. That they gave an album. It was not a joke. You could buy this album. For sale. At a store. Or online.

Their last release, Everything Will Be Alright In The End, was hailed as a return to form. I listened to it. It wasn’t. It did have a pretty interesting “suite” of material at its back end that hinted to some proggy inventiveness that was refreshing. But prog-rock isn’t what I come to a band like Weezer for, and this album had “Back To The Shack” on it, which is a bad song that I have a difficult time believing anyone could ever like. It is a bad song.

So, I came to Weezer’s new album, The White Album (yeesh), loaded up with a challenge to rip it a new asshole and completely expecting to do just that. The third track on the album, “Thank God For Girls”, is terrible. It is every bit as bad as the worst of the material that they’ve recorded for the last 15 years. It is worse than “Pork & Beans“. And at first blush, the album trucks along at about that speed. The first two tracks, “California Kids” and “Wind in Our Sails” are definitive examples of modern-day mediocre Weezer, the former containing a bit of a Pinkerton-esque guitar & glockenspiel fake-out in its opening seconds that got my hopes up, before my hopes were dashed on the rocks of some All-American Rejects calibre garbage. So, yeah. I was going to trash it.

Then something weird happened.

“(Girl We Got A) Good Thing”, the album’s fourth track… is great. It is vintage Weezer-aping-The Beach Boys, which is what got us all liking them in the first place. It’s a well constructed pop song that I keep coming back to. I come back to it and I hate myself. Because it’s coming from Weezer, and they’ve hurt me so bad so many times. But, this song is a slice of pop heaven. With weird, lame and creepy lyrics. Because it’s Weezer.

“Good Thing” is followed by “Do You Wanna Get High?”, a song that I was completely expecting to hop back onto the hate train for. It’s another Weezer drug-reference song. But here’s the thing – this song is totally okay. It cribs from Pinkerton-era Weezer a little heavily, but it’s got an “I Will Survive” chord progression that works for me almost every time and a truly great bridge. It always seems like Rivers Cuomo writes about drugs after having read about drugs on Wikipedia, but lyrics-shmyrics. I like the song.

There’s a dip in the goodtimes for a moment with “King Of The World”, a song that sound so much like Ozma, you would think that it was Weezer covering Ozma, a band that only existed because it ripped off Weezer mercilessly. Not worth getting into. Bad song. So I think for a moment that perhaps the equilibrium had been reestablished and I can go back to shitting on this record. If only.

“Summer Elaine and Drunk Dory” has the worst title of any song on this record. It’s almost impressively bad, like “wow, it must have taken you all night to come up with a title so bad, Cuomo. You shit.” It also has a great chorus and an even better bridge. Ho-hum verses, but I would have forgiven this song without reservation on one of the early 2000s-era Weezer records. It’s at this point that I start having serious trouble grappling with the fact that I don’t know what to make of this record. And then it happens.

“L.A. Girlz”. With a “z”. So stupid. The title, I mean. The song? The best Weezer song in 20 years. Bar none. This song brings to the table exactly what I want from a Weezer song, the grunged-out waltz and soaring melodies. It comes down to a hush in the bridge and builds in the most Weezer-esque way into an absolutely perfect crescendo. I love this song.

Immediately after, the album completely shits the bed with “Jacked Up”, the second worst song on the record and “Endless Bummer”, an acoustic ballad that lives up to its name. I’m left feeling like someone pulled a fast one on me. 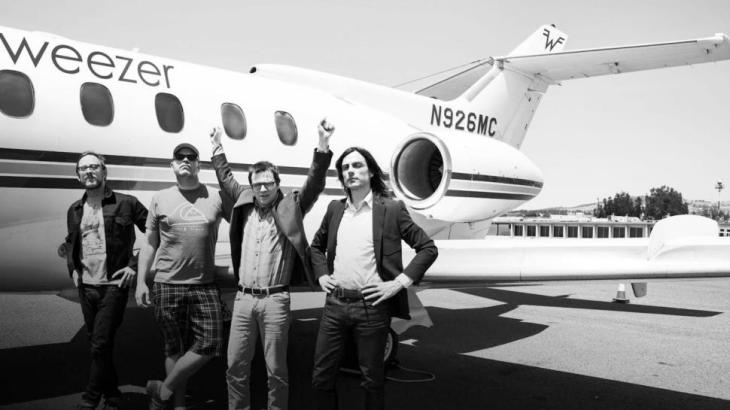 I’m not going to call this a good record. It’s not quite that. There are still more songs on this that I’d go out of my way to avoid than choose to listen to. But there are songs on here that speak to the fact that this band is still capable of making music that I love, which is a very confusing thing to me. I had written them off completely.

This is emotional. It’s like speaking to someone who you’d spent great times with who’s been suffering from dementia for years, and then they suddenly tell a great story that reminds you of who they once were and for a few moments you’re overcome with emotion because of how badly you’ve missed them and because you know that it’s just some kind of strange echo from an untenable place inside of them.

…here’s a bunch of fucks from a Kevin Smith movie in a video for my favourite Weezer song.