Nine Inch Nails’ debut album, Pretty Hate Machine, was released on October 20, 1989. The album peaked at #75 on the Billboard 200, but would eventually become a Gold certified record two years later. In 1995, the record became one of the first independently released albums to attain Platinum status, and was certified Triple-Platinum in 2003.

For many years in late elementary school (the early 90s, for those keeping score), my only impression of Nine Inch Nails was that of “those scary men in that hole-head video that’s on Much Music sometimes”. Admittedly, it was not until the release of The Downward Spiral in 1994 (or perhaps even a few years afterward) that I would become infatuated with Tommy Ramzler, the dark prince of alternative music. Pretty Hate Machine was decidedly not on my radar.

Even after getting into NIN in the darkest years of my teen angst, Pretty Hate Machine would remain a bit of a mystery to me. “Head Like A Hole” was absolutely ubiquitous, of course, but I did not wind up ever owning the album that it belonged to. I seem to remember Pretty Hate Machine being a really expensive album to buy, and there were always other albums that I could get cheaper that I wanted just as badly. As a consequence of this, it is my least-known of the early NIN albums. I’m sure that I would have listened obsessively if I had owned it, but as I didn’t, the songs are largely fresh to me now.

Let’s dive in with a round up of the songs that Trend Rubbler decided to pile onto the NIN debut!

Head Like A Hole
If you’ve ever listened to “modern rock radio”, you’ve heard this song somewhere in the neighbourhood of 30 million times. They’re still playing it constantly. For good reason, honestly. This song (and video) seemed very scary to me when I was 11 or 12 – and yes, there’s some shouting and chanting on this track that still pack a wallop – but this song is catchy as hell. At its core (as with many NIN songs), this is a pop-dance track with buzz-saw guitars and shouting in it. The hooks are massive. I’ve heard it a million times and I’m still not sick of it. A true classic.

This may also be one of the first songs that I ever heard that made me thing “Holy hell, these people are mad about something!” It was a scary and thrilling feeling. Great memories. Love this song.

Terrible Lie
In a lot of ways, this song sounds prototypical for a lot of work that this group would do in a more refined fashion later on. The creaking, squawking industrial sound palate working away under some lyrics that sound like they were written by a kid in grade 10. The soaring synth chords over the four-on-the-floor chorus sections. A number of repeated vocal lines layering over each other hypnotically as the song moves forward.

It is fine, but there are better examples of this template at work on both Broken and The Downward Spiral, so “Terrible Lie” just seems a little boring to me. There’s something sluggish about it, and while it may have sounded fresh upon release, knowing about the more interesting work to come relieves it of any bite that it may have had.

Down In It
This might be a good point to say something about the fact that this album, like all Nine Inch Nails albums, sounds pretty remarkable. The kick drum on “Down In It” is massive, and the song churns like some kind of super catchy meat grinder. That being said, “Down In It” also features something that was universally embarrassing for the duration of the 1980s: a white person rapping. The verses of this song are absolutely cringe-inducing. It is as bad as when Debbie Harry raps in Blondie’s “Rapture”. The chorus is fine, but the song never really recovers.

Sanctified
While bass slapping is usually a huge red flag for me, the slap bass in this song is actually pretty effective. It works well as a repeated figure underneath the tension building in the other instruments around it. The vocal performance in “Sanctified” is rather weak and strangely tuneless, but as a whole I feel like the track works as an atmospheric creep-fest. It establishes what will become a well-worn Trent Reznor device: being very creepy about doing sex with ladies.

Kinda I Want To
There are elements of the sonic palate used in “Kinda I Want To” that I feel like were used into oblivion during the mid-90s “Electronica” explosion. The stabby synth work in the choruses sound all too familiar, as do the sections that sound like an elemental version of the speedier break-beat sound that seemed to be ubiquitous at one time. Props to NIN for being so far ahead of a curve that I assumed was cemented in around 1996. “Kinda I Want To” is a fine, but not stellar track. I wouldn’t call it a high point, nor would I skip it were I listening to this album on a Discman or something. It’s alright.

Sin
Nine Inch Nails songs often have plenty of great scary noises. This one opens with a bunch of them and it is great. Also, this song bumps. Easily a favourite off of this record. Like many of the songs on this album, it sounds a bit like a gestating version of material that would come later, but it is aggressive and catchy enough in its own right to be a standout in NIN’s canon. Also notable because it sounds like ol’ Terry Razor is pretty mad at whoever he lost his virginity to. Spicy!

That’s What I Get
The vocal take on “That’s What I Get” is really reaching for something and completely missing the mark. The song as a whole sounds like it isn’t fully formed. More of a sketch or a throwaway than others on the album have been. Kind of a bummer.

The Only Time
I can’t write this song off, because it contains the line “the Devil wants to fuck me in the back of his car”. It also features an early version of the queasy, ascending atmospherics that would feature prominently on The Downward Spiral. “The Only Time” isn’t a masterpiece, but there’s plenty to enjoy here.

Ringfinger
The album’s final track starts with a very long intro that sounds like a pre-programmed loop on a microKorg analog keyboard. Given that this album predates that keyboard by a number of years, I can’t really dock any points for that. “Ringfinger” doesn’t really impress until some beyond-fuzzy guitar kicks off the outro section, all of which manages to kick as despite (or perhaps because of) some very dated record-scratching.

When you think of our boy Trent, what’s the first thing that comes to mind? Is it smoulderingly sexy fashion? It is for me! 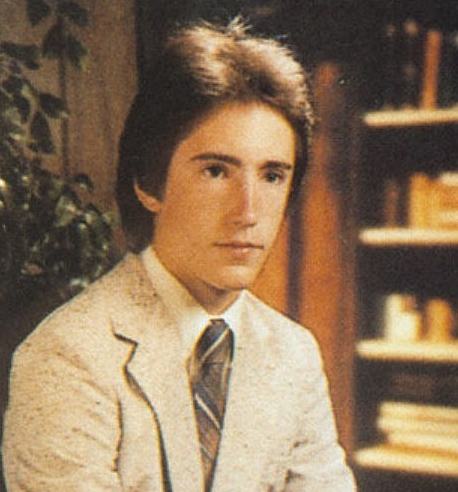 While this image is technically from Trent’s pre-NIN days as assistant to a faith healer who worked in a travelling tent, I think that it provides a pretty good baseline for what we’re working with. Reznor was by no means an unattractive young man, but I’m not sure that anyone could have predict the “Elvis in PVC Sex Pants” mystique that he would unfurl in his near future.

Here is an image of Trent and the Pretty Hate Machine lineup of Nine Inch Nails. It is hard to say exactly what happened to him in the time between the previous photo and this one. Perhaps the person referenced in “Sin” shaved the sides of his head and bought him a bunch of black clothes before breaking his heart. Perhaps he did it himself after his heart was already broken. No matter the cause, this look oozes pain and mystery.

And anger. Hilarious anger. The hair that he does have looks like it smells terrible. If you look closely, it appears that his drummer is wearing conventional blue jeans, and I’m currently wondering why Trent would let him get away with that shit. Shape up or ship out, square.

Here we see Trent wearing a very fashionable oversize shirt with an obscenely large collar and very functional front pocket. His pants look suited to the work of a sad clown, cinched high in the waist and baggy. He looks ready for one of his famous and hilarious pratfalls.

Pretty Hate Machine contains some great material and is undeniably an important piece of work. I’m of the opinion, though, that it is not nearly the best work of Nine Inch Nails. Rather, the album points to the direction that Reznor would head in that would lead to his best work.

The sounds are terrific, but (with the exception of some true bangers) the songs do not sound fully formed, and there are vestigial elements of 80s dance/industrial cheesiness that do not mesh well with the freshness of Reznor’s best ideas. The best moments of the album stand shoulder to shoulder with any of NIN’s material, but Pretty Hate Machine can frequently sound dated and amateurish.