Making something that is new can be extraordinarily difficult. I tend to go easier on artists whose goals are to try something that hasn’t really been done before. No Man’s Sky takes elements from a number of types of games, but it truly is the first attempt at the game I have always wanted to play. And while it fails in many regards, it is worth experiencing precisely because there isn’t any other game like it. 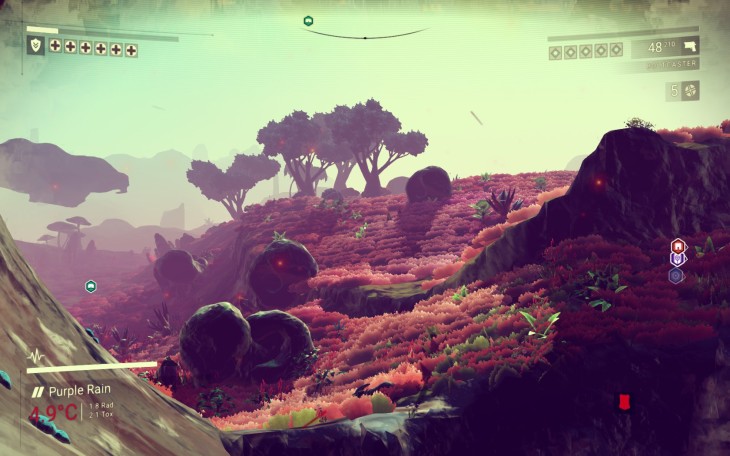 No Man’s Sky is a universe simulator. You start on a random planet (in literally one of quintillions of solar systems) with a broken spaceship. You’re provided the recipe to fix your broken ship, and the opportunity to follow some path laid out by a mysterious entity, but really where you go and what you do is up to you. Ostensibly, your goal is to reach the centre of the universe, but in my experience I didn’t find it a particularly satisfying objective. The best part of this game lies in exploring.

And to say “there’s a lot to explore” would be so comically understated that I’m just going to dwell on it for minute. The game is so vast that its designers only saw a microscopic slice of it before they released it to the public. The game is so vast that even with millions of people who bought and played the game, the majority of this simulated universe will go unexplored. No one has ever seen the planet where you start, its creatures, its sunset or its mountaintops, and there’s a very good chance that no one again will see it. There is something beautiful in that thought. As I explored, I only once encountered a system that another player had visited.

To generate all this content, the game designers created an algorithm that sets up rules for the universe: if a planet is closer to the sun, then it has more of x; if a planet’s temperature is above a certain point, then y; and so on. Rather than handcrafting each planet or animal, the designers rely on this algorithm’s rules to create all the content for them. In practice, this felt more random than anything, with no easy way to predict what you were going to get from one to the next.

A “procedurally generated” game (as they’re called) lives and dies by its assets. It’s one thing to create rules for where animals should exist, and what kind of animals those should be, but someone still has to design each type of limb, each head, each body, each wing. Ditto for the plant life. It’s in this regard that the strains of No Man’s Sky start to show. For one, the creatures on my first planet were bizarre, inelegant chimeras of randomly chosen body parts, meandering across the countryside; for two, the creature designs (quadrupeds, insectoid, winged) and plant varieties (fungus, tree, rock-like) appear extremely limited, and so it doesn’t take long before repetition sinks in.

Once my spaceship was repaired, I decided to explore my first planet before going anywhere. Here I ran into three major limitations: the planet looked exactly the same across the entire thing, with no varying ecology or biomes; the flight was heavily assisted, preventing me from getting close to the ground or crashing; and, most egregiously, the “pop-in” of textures and terrain was really awful, with hills suddenly springing up in front of me. Still, it was remarkable to fly around this enormous planet, chasing the sunset, and then turn my ship toward the zenith and breach the atmosphere.

Going into space is perhaps the best example of No Man’s Sky being a seamless experience. There are no loading screens or transitions. You simply point your ship and go. While I’ve played one game that has atmospheric entry and exit, it was in a single solar system with just a few barren planets. For No Man’s Sky to generate a universe of places to go, and to allow you to travel so freely in this respect, is impressive.

But its impressiveness is lost in the details. As I explored, I found that there were no gas giant planets. There were moons but they were by and large similar to the regular planets. You can never reach a solar system’s sun. Space is almost always colourful, as if you’re in a nebula, rather than cold and black and infinite. There are endless asteroids filling up the space, and they don’t approach from a distance but rather pop in at the last minute. There are other spaceships doing not very much, and you can’t interact with them.

As I explored the neighbouring planets in my starting solar system, I was disappointed to find so many of their characteristics similar, the same rock formations and caves, similar quadrupeds, and so on. I chalked that up to the algorithm making everything in the area homogeneous. And to some extent that was true: when I went to neighbouring solar systems, I found bodies of water, bizarre dragon-like creatures in the sky, and even a snow planet. But it didn’t take so long to feel like I’d seen all the elements, if not all the combinations of those elements. Worse, some of the things I think are so meaningful in nature—forests, oceans, mountains—were entirely absent in the universe. And finally, every single planet had sentient alien species, with artificial structures, living there. It’s hard to think of yourself as an explorer when literally every planet in the universe has already been visited (even if it’s not by actual other players).

Still, for the six to eight hours I spent exploring for the sake of seeing new things, I enjoyed myself immensely. Landing on your first planet with a crazy storm in progress, or where it’s pouring radioactive rain, is pretty neat; it just loses its novelty when you see it again and again. At first I was just astounded by some of the creatures I encountered, but by the end I was bothered that the animals thriving near 100 degrees celsius looked more or less the same as the animals that lived on planets with temperatures 100 below zero.

So after the excitement of exploring wore off, I turned to the actual objectives to the game, namely getting to the centre of the universe. This turned out to be the worst part of No Man’s Sky. Each type of transportation, be it faster-than-light travel or simply tooting around a planet, costs resources. For more and more extravagant flight (as well as a better space suit and gun/mining tool), you need to build more and more extravagant items out of rarer resources. So to get fuel, you need to make X, and to make X, you need to make Y and Z, and so on. But many of these items are rare and not clearly marked on a map, and when surveying from the sky they can’t be seen because of the planet’s terrain not popping in. Gathering resources is a real slog and a baffling design choice in this game. It’s also compounded by a tiny inventory that means you’re constantly on the menu screen instead of playing the game.

In the end, I decided I wasn’t that interested in finding the centre of the universe. I just wanted to find somewhere beautiful. I warped to a new solar system, maybe my twenty-fifth or thirtieth in total, and the second planet in had a beautiful blue sky, a neighbouring planet filling the horizon, and it was teeming with life. I set my ship down near a very large lake, hopped out, and watched the sun set. I like to think that that’s where my character stayed for the rest of his life.

In its ability to create personal stories, then, I think No Man’s Sky should be applauded. Its designers made an ambitious game unlike anything else, and if you have any wonder for the natural world, this game will probably evoke it in you for a few hours at least. The ways the game fails, in particular that feeling of being in a holodeck zoo rather than an enormous, wild, interactive place, it fails tremendously. But the seamlessness of the experience, the ability to see unique things that no other person will ever see, and the variety of gameplay should be commended. I can only hope, after all the negative reaction toward this game—both because of promised features that were absent, and because no game of this scope could ever live up to expectation—that the studio iterates upon the design, spends time making a better version of it. It’s a deeply flawed attempt at a universe simulator, but it’s only the first attempt. I’d love to explore some more.