You may know this already, but technically, we here at the Fraudsters’ Almanac are a bunch of grown-ass adults. Our interests may revolve around the legacy of such seminal artists as Troy Raisin, or how urine-like the colour of our beer is, but biology doesn’t lie: we are not children and have not been children for a very long time.

So why, then, am I reviewing a Nintendo on our site?

It turns out that the new Nintendo console is as well-suited for child-like adults as it is for children proper. Through a combination of versatility, good design, and a new era in games, the Nintendo Switch is a fantastic device for old people to play vids.

I won’t pretend I bought it for the right reasons. Truthfully, I just wanted to play the new Zelda game (its full, bloated title is The Legend of Zelda: Breath of the Wild) and Nintendo was the only platform where it was available. I could have bought Nintendo’s older console, the Wii U, to play the game, but I’d rather have a system that will continue to be supported. Plus, look at this announcement trailer for the Switch:

A boring scruffy thirty-something white dude with a dog! Wasting precious daylight at airports and on flights! Convincing your far more interesting friends to squander their time on video games! It’s like they know me.

But really, the promise of the system was intriguing, too, and I felt less guilty buying a new thing to waste my time on precisely because it did things that were different from all my other time-wasters. 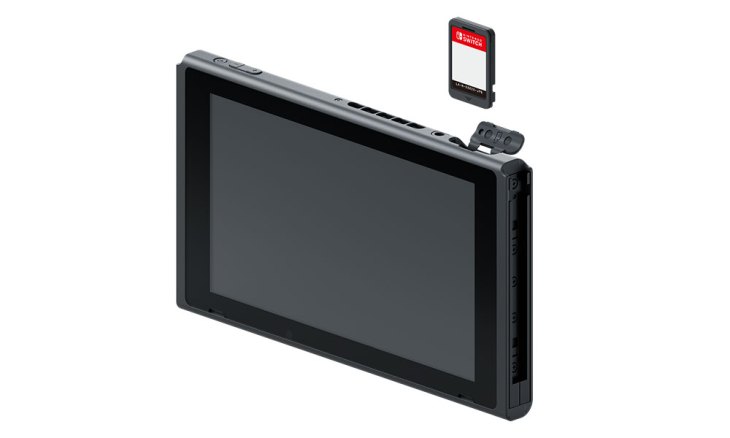 The Switch itself is a boring slab somewhere between the size of a large iPhone and a small iPad, but a little thicker. It’s pretty unremarkable to look at and nothing about it (headphone jack, Flash-like card slot, volume buttons) is cute or fun. It’s only when combined with the controllers that the system gets any sort of personality:

Anyone with even a shred of whimsy would get the coloured “Joy-Con” controllers. (I’m feeling buyer’s remorse for getting them in grey.)

So at its simplest format, it’s an iPad with controllers, or a modern-day Game Boy, or whatever you want to call it. A portable gaming system has its own utility, such as when travelling, but if that’s all the Switch were, it wouldn’t have been that useful for me. For one, I’m not a big fan of having my controls attached to the screen, because it turns out I waggle my hands like a moron when I’m playing games. Thankfully, the Switch has me covered, because the controllers come off and the device itself has a little kickstand so it can be played like a portable television: But even then, I’m not a fan of holding the two little Joy-Cons in my hands for more than a few minutes. Once again, Nintendo was smart enough to predict this, and packaged the Switch with a “Joy-Con grip” into which the controllers slide: (See, the grey doesn’t look so bad, but why pretend video games are classy instead of fun?)

While this isn’t the most ergonomic controller I’ve ever used, it’s sturdy, completely fine for playing at length, feels like a nice combination of familiar and new, and its battery life is about five million times longer than the Playstation 4 controller (which, admittedly, I’m not a fan of). There’s also a “Pro” controller for the Switch that you can buy separately, and it feels great, more or less like a modern XBox controller.

Another nice touch is that each Joy-Con (i.e. the blue left half and red right half above) can be turned sideways and used as an independent controller, so that two players can play a game using one set of Joy-Cons. These little squares have all the buttons of a Super Nintendo, even shoulder buttons, but are comically small in the hand and not ideal for any sort of playing experience. That said, it’s a great solution to playing in a pinch, be it while travelling or trying to impress family members over the holidays. It also reduces the need to buy more controllers when the Switch seems best suited to small, simple games (more on this later).

So it’s a fancy Game Boy, then. Again, this sort of device has a niche, but it’s not something I ever felt I needed to own; someone very smart once invented things called “books” and travelling has been better for it ever since. The battery life on the Switch itself is a few hours at best, so it’s not going to keep you occupied for a long flight (again, read a book, you philistine). But as a way to kill a little time on a long journey, of which I often find myself undertaking, it’s a great addition.

But then you take the Switch home and it seamlessly becomes a home device by placing it into its dock: 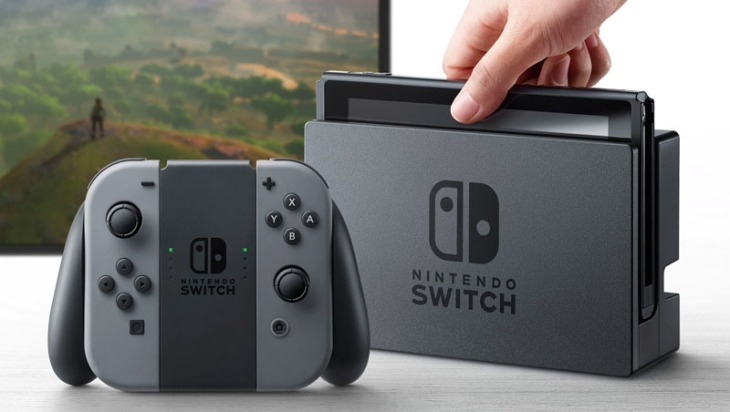 It’s hard to overstate how well this works. Within a second or two, the game you were playing while travelling pops up on your TV and you can continue where you left off. Even writing it here doesn’t capture the effect. If you’re at all the type to play stupid games on your phone in transit, or games via Steam on your computer at home, just imagine having a smooth, perfect transition from outside to inside, while also playing good games (and not things called Tap Titans or Clicker Heroes), while also getting the “it just works” console experience all throughout.

If any one element of the design didn’t work, if the controllers were fragile or the console too bulky, then the Switch would be a neat idea but not worthwhile. Instead, it’s a beautiful screen for mobile gaming, transitions instantly to a TV experience, and has unique controllers. I love it as a device.

But the hardware wouldn’t matter if it didn’t have decent software. Because of its tiny design, because all of its brains are stored in a device just a little larger than an iPhone, it’s not going to be able to graphically compete with the other two home consoles, the Playstation 4 or XBox One. True, the new Zelda game is beautiful, but that’s mainly due to great art design, not technological prowess. 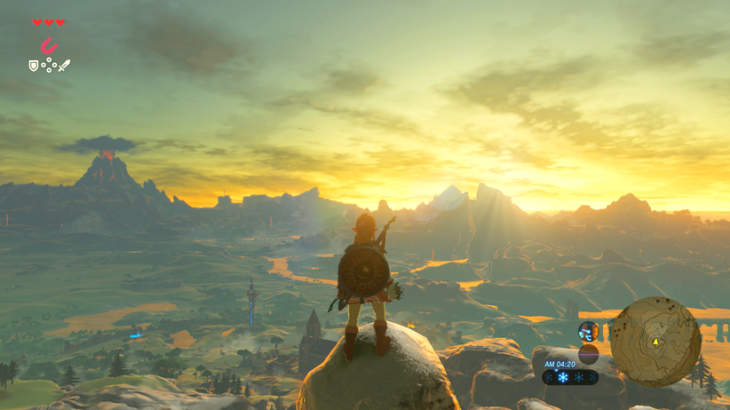 But you know what? Most of the fancy-looking (so-called AAA) games these days are pretty dull. Like big-budget movies, video game publishers are pouring tens (or hundreds) of millions of dollars into development, and thus they have to ensure that their games appeal to a broad audience. These sorts of games tend to play it pretty safe in terms of both the narrative and gameplay, giving you more of the same. If this were the be-all and end-all of the industry right now, I probably wouldn’t play games at all.

Thankfully, and again like the film industry, there’s an incredible renaissance going on with independent game-makers. People playing on computers have been taking advantage of this for years via services such as Steam or itch.io, and more recently Playstation and XBox owners have been getting these smaller titles, too. The relevant part for this review, though, is that most of these smaller budget games aren’t cutting-edge in terms of graphics, and that means the Switch has more than enough power to run them.

I’ve played a handful of games on the new Nintendo so far, and I can say it’s ideally suited for these smaller, indie-game experiences. Zelda is dreamy and relaxing, as good as everyone claims it is, and is a huge adventure that lasts dozens of hours. But all the other games I’ve enjoyed on the Switch are smaller titles. Gonner is a cute but mean-spirited 2D romp through the underworld, like Super Mario Bros. but harder, randomized, and with a unique visual style. Kamiko looks, sounds, and plays like a throwback to the old Nintendo systems and is a great way to kill a couple of hours. And my favourite, Thumper, fulfills a lifelong dream to be a scarab beetle descending into hell on a HotWheels track at the speed of sound while fighting to the rhythm of an evil Blue Man Group:

The best part of all these smaller experiences is that they have a much smaller price-tag than big-budget games, which means you don’t feel particularly burned if you try a game and it isn’t really for you.

If you have any love for Nintendo’s classic games, like Mario Kart, you’ve got even more incentive to pick up a Switch.

As of writing this, the Nintendo “eShop” is pretty thin, but it seems that smaller developers have realized how great this console is for their games and are working on bringing them to the platform. Personally, I’m looking forward to having a way to play Overcooked with friends on the go (the simple controls are perfect for splitting up the Joy-Cons), and Stardew Valley seems like a great fit for the device. 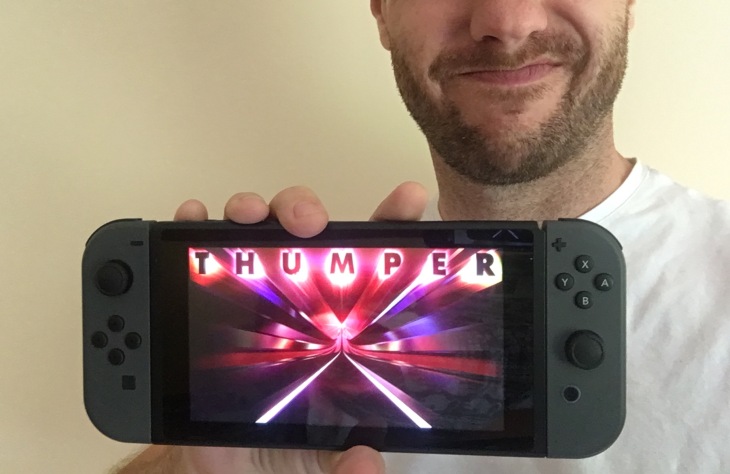 I’m a grown-ass man with responsibilities that require me to travel a lot, kill twenty minutes to an hour at random (e.g. kid naps), and get comfortable for days in places that aren’t my home. I didn’t realize there was a way for one video game device to meet all those needs, but the Nintendo Switch does exactly that. It’s so flexible and versatile, in fact, that it will be the first place I look for games from now on. I’d rather play on the Switch than anywhere else. Come on over, or invite me out for a drink, and I’ll show you this stupid little device that is also kind of awesome.